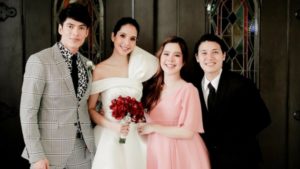 ACTRESS Maxene Magalona expressed her support for sister Saab Magalona, who announced the loss of her
baby girl on her blog last March 6.

On Tuesday, in a series of Instagram posts, Maxene shared photos of her and Saab.

Another was a group photo taken during the church wedding of Maxene and Rob Mananquil at Santuariode San Antonio Church in Forbes Park, Makati.

“We will always be here for you,” Maxene captioned the photo.Saab broke the news on Feb. 8 in a heartbreaking post titled “Heartbroken but Hopeful.”

According to her she stayed silent about the matter because she thinks she had been in denial.

Saab and her husband Jim Bacarro were expecting twins.

Last month she was in and out of the Intensive Care Unit (ICU) of a hospital. She even thought she wouldn’t make it.

While she lost her baby girl, her boy is still at the Neonatal Intensive Care Unit.

“The doctors initially said he was in critical condition. He has fought through so many complications and had to undergo surgery and is thankfully doing much better today,” she said.

She thanked God for getting through the pain they felt and lifting the anger from their hearts.

She also thanked the people who expressed love and concern.

“We ask that you continue to pray for our family, especially for our angel and for our baby boy,” Saab said.

Saab and Maxene are daughters of the late Filipino actor and rapper FrancisMagalona.