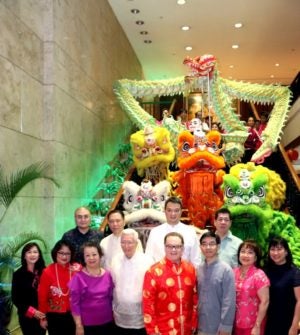 THE MARCO Polo Plaza Hotel ushered in the year of the Earth Dog with the usual pageantry—firecrackers, zymbals, and clamgor galore the night
of Feb. 15, eve of the actual Chinese New Year.

There was general manager Brian Connelly in red and gold brocade dotting the eye of the lion even as the intricacies of the dragon dance enveloped the great audience at the foyer.

Consul General Shi Yong of the People’s Republic of China was guest of honor. He led the tossing of the huge Yee Sang salad which filled a large bowl.

The chopsticks were gigantic.

Dinner followed at the Cafe Marco where the chefs had displayed an array of specialties from the variegated Chinese cuisine.

It was the opening of a Chinese food festival from February 15, to 18. Within the Year Chinese cuisine, the cantonese variety, will be offered at the Marco  Polo in a Chinese restaurant already undergoing construction. 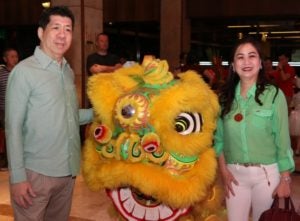 Meanwhile, the Marco Polo will celebrate the Feast of St. Patrick, patron of Ireland, with an Irish food festival at the Cafe Marco from March 15 to 19.

Today, March 9, the Marco Polo goes overboard with its hosting the Induction gala of La Chaine des Rotisseurs Cebu chapter at the grand ballroom,
for over 120 guests.