Use of CSCR by PUJs considered to ease N. Bacalso Ave. traffic 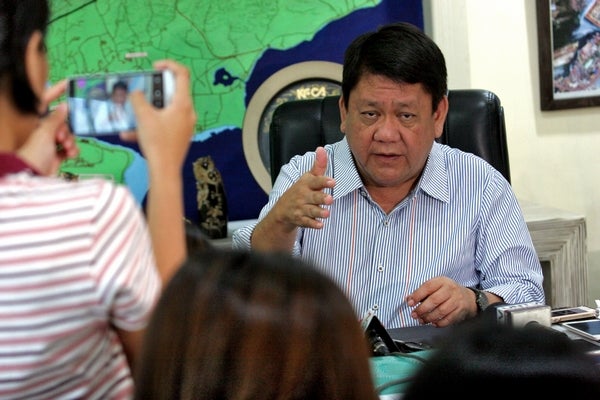 Cebu City Mayor Tomas Osmeña proposes to allow jeepneys to pass on the Cebu South Coastal Road to ease traffic congestion on N. Bacalso Ave. brought about by the closure of its southbound lanes to give way to DPWH’s underpass project.
CDN PHOTO/JUNJIE MENDOZA AND FILE PHOTO

During his regular press conference, the mayor said he has been meeting with the City Transportation Office and the Land Transportation Franchising and Regulatory Board (LTFRB) to discuss plans to allow public utility jeepneys (PUJs) to pass the CSCR.

“There’s a legal question because we have an ordinance that says jeepneys are not allowed (to pass the CSCR). The mayor cannot go against his own ordinance except in an emergency,” he said.

“To pass an ordinance takes time because there’s publication, public hearings. But the council could at least declare an emergency first. At the same time we’ll go through the process of formalizing it,” the mayor added.

Osmeña said we should try out possible solutions and adjust to new situations.

LTFRB Regional Director Ahmed Cuizon said it is a welcome move. In fact, he said, they have already conducted a series of meetings and ocular inspections with the traffic officials of Cebu and Talisay City.

“We’re into talks with his office about it now. After Mayor Osmeña called me about it last Saturday. We should be able to implement a combination of measures that include the rerouting of some PUJ routes at the SRP to help decongest the Shopwise area by next week,” he said.

For now, he said, the regular routes of all jeepneys from Minglanilla, Naga and San Fernando will be shortened.

PUJs will stop and unload passengers at the area fronting the Toyota building near the Talisay tip of the Cebu South Coastal Road.

From there, buses will pick up the passengers and bring them straight to the Compania Maritima at the back of the city hall.
Cuizon said he already talked with the bus operators in the city and they are amenable to the scheme.

“We’re doing a calibrated rerouting, starting with PUJs from Talisay and Tabunok. We will observe if it helps and if more routes should follow suit depending on the outcome,” he said.

PUJs from Talisay and Tabunok will pass in front of SM seaside, take a u-turn under the viaduct section, then proceed to N. Bacalso.

On the other hand, Mayor Osmeña is consulting traffic officials regarding his plan to ban private cars from passing N. Bacalso Ave. during peak hours.

“Right now everybody suffers. We’re creating a situation where private owners will suffer but the public will not. So ato ng timbangtimbangon unsay atong unahon. (Let’s carefully consider what we will do.) So instead of everybody unhappy, make some people happy. The others would remain unhappy, but what can I do,” he said.