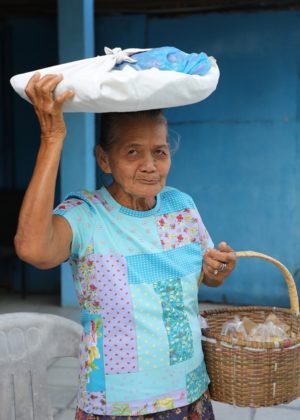 For most people, doing business is for profit, with the long-term goal of growth and expansion.

But there are also some who do business as they know it, trying to get by day after day — just like 71-year old Larding Pepito.

For over 40 years, Pepito, a native of Liloan town, has stuck with the same old business model — making her own homemade “masi” every morning and traveling all the way to Mandaue City to sell it in the afternoon.

“I learned this from my aunt who was really making masi for a living. That was their business when we were still small. We would go to their house, and we’ll be asked to clean our hands so that we can help her make masi. She said she wanted us to learn so that when she passes away, we could continue making masi,” she said in Cebuano.

Masi is a delicacy made of glutinous rice with a filling of sweetened peanut paste.

It has been made popular in the town of Liloan where there are a lot of other small-time vendors like Pepito selling around the town’s plaza and along the highway.

As far as she can recall, Pepito said masi was already popular in Liloan since she was a kid.

It has been made by residents in the town mainly because all the needed ingredients — sticky rice, normal rice, peanuts and brown sugar — are easily sourced within the area.

And just like what her aunt wanted, Pepito continues to make masi until this day. This is her only livelihood since she only completed Grade 3 in school.

She never married and is currently staying with her niece and her family in a hinterland sitio in Barangay Yati, Liloan. 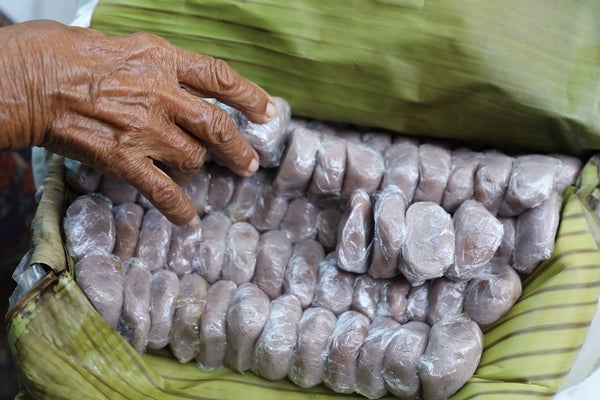 Larding Pepito, also known as “Manang Masi” to some of her patrons, (below) has been in the masi-making and selling business for four decades.

Every day, except on Sundays, Pepito would wake up at around 5 a.m. or 6 a.m. to start preparing the masi she would be selling.

First, she would boil some water and then put in the sticky rice as well as the normal rice — adding the normal rice, she explained, would ensure that the mixture would not be too sloppy and wet.

After cooking the rice, it would then be kneaded and mixed with some coconut milk. This will then be formed into small balls.

In another cauldron, she would mix the ground peanuts with cooked brown sugar to form the peanut paste that will be the filling of the masi.

She finishes all of this by 10 a.m. Then she would rest and eat for about an hour before heading to Mandaue City at around 11 a.m.

By the time she gets to the city, it is already 1 p.m., just in time for her patrons to start craving for an afternoon snack.

Pepito sells her masi at P5 per piece.

Although she started with just selling masi, she is now also selling other delicacies she bought from other makers in Liloan like budbod, cassava cake, biko, and bibingka.

She earns between P500 to more than P1,000 a day. Of this amount, she sets aside P500 to P700 for the ingredients she needs for the next day. The rest, she would use to buy food and pasalubong which she would give to the children of her niece whom she also considers as her own grandchildren.

Asked why she chose to travel all the way to Mandaue City to sell her delicacy, Pepito said it’s because there are already a lot of other masi vendors in Liloan.

“Nangita kog arang-arang nga katindahan. Mas nindot diri sa Mandaue kay bintaha gyud ang akong matinda. Daghan na pud ko ug suki diri nga sukad pa sa una mga bata pa sila naninda nako hangtud karon nga nangadagko na sila,” she shared.
(I looked for a better place to sell. It’s better here in Mandaue because I could sell more. I also have a lot of patrons here who have been buying from me since they were kids until now that they are all grown up.)

Despite her old age, Pepito is thankful that she is still healthy.

Her only problem now, she said, is there are times when her arthritis on her left knee and foot would act up. But even so, she said she endures it to continue selling.

When it gets too bad, she would rest, but she said this is always just a last resort.

She said her niece would constantly talk to her to convince her to stop selling and just rest at home and help with the household chores.

But she refuses to stay home and continues with her business.

She only assured her niece that she would rest when she would need the rest.

Her left leg is noticeably bowed, and she would exert more effort on her right leg when she walks. But she does not seem to mind as she hurries to the next house she’s set to visit.

In her many years of selling masi, Pepito is proud to share that she had been able to completely pay off a five-year funeral and memorial plan which was eventually used when her father died several years ago.

She had to pay P300 a month for five years to do that.

Now, she is also paying for another funeral plan for herself, adding that she is not getting any younger and she does not want to give any burden to her niece and her family when she’s gone.

Part of her extra money is also being used to finish a small hut she has been investing to build.

Unlike most businessmen, Pepito said she never thought of expanding her business to produce much more masi and sell to even more customers outside of Mandaue City.

For her, it’s enough that her business sustains her daily needs and gives her the chance to extend some help to her family.