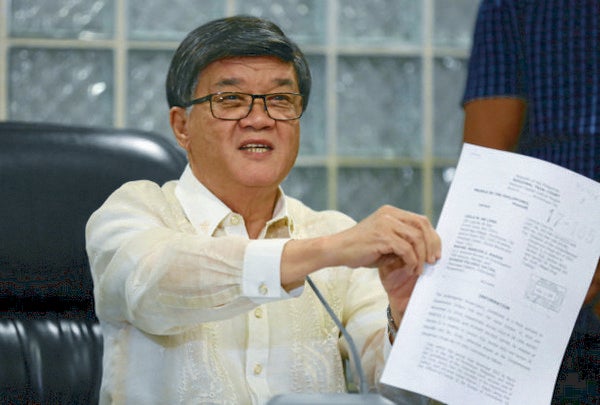 Justice Secretary Vitaliano Aguirre’s dismissal of the drug cases against Cebuano businessman Peter Lim and self confessed drug lord Kerwin Espinosa is a disservice to the Duterte administration.

“Aguirre is very, very liberal. He likes to forgive everybody. Imagine … he’s the one who dismissed (the complaints) against David Lim Jr. And the reason is stupid. Tell Mr. Aguirre he’s really stupid because the reason he gave was to produce the gun. But they did not produce the gun, saying the videos that saw him shoot is not evidence. Ok, case dismissed … So, I’m not surprised (with his decision clearing Espinosa, Lim, et. al),” Osmeña added.

The mayor said Aguirre’s actuations as DOJ secretary may just spell doom for the Duterte administration, which places an intensified campaign against illegal drugs on its front lines.

Asked if he would lobby before the DOJ to reverse its decision, Osmeña instead suggested that the justice department get rid of Aguirre.

“I just want Aguirre out. I think he’s doing a disservice in the administration,” added Osmeña.

But hours after Osmeña made his comments, Aguirre explained that the decision to dismiss the charges against Lim, Espinosa and the other accused, was not yet final, the reason why they did not release any copies of the decision to the public.

The DOJ’s resolution stated that the police relied on the testimony of its witness Adorco, whose testimony, according to the prosecutors was “rife with inconsistencies and contradictions”. They also said that law enforcers failed to present additional evidence to support and strengthen Adorco’s claims.

On the other hand, Aguirre said the dismissal of the charges against Lim and Espinosa is but “a slight bump on our war against drugs”, and that it is “not a final exoneration” of all the respondents’ criminal liabilities.

“Under our present procedure in the DOJ (Department of Justice), there are possible avenues to review this case, either by a motion for reconsideration, or ultimately, by way of automatic review by my office,” Aguirre said.

He cited the case of the P6.4-billion shabu shipment which was previously dismissed in favor of Customs officials but was refiled with additional evidence submitted. /WITH INQUIRER.net

Read Next
Tommy’s agenda: Get back majority in council