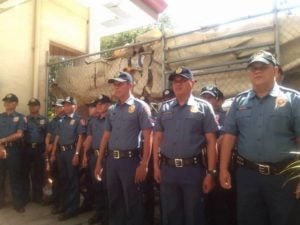 New policemen are now manning the Parian police precinct after Police Regional Director Chief Supt. Robert Quenery ordered the relief of the 39 cops, including their chief. The relief came after the arrest of PO3 Ritchie Saquilabon who allegedly extorted money from a drug suspect. Senior Insp. Porferio Gabuya is now designated as officer-in-charge (OIC) of the precinct
CDN PHOTO/Benjie Talisic

THE Parian Police precinct was manned by new personnel yesterday after the relief of all the policemen, including the precinct chief originally assigned there.

The 43 new police personnel came from different police precincts under the Cebu City Police Office (CCPO), who agreed to a new assignment.

Police Regional Director, Chief Supt. Robert Quenery relieved all of the policemen assigned at the precinct after the arrest of PO3 Ritchie Saquilabon, who allegedly extorted money from an arrested drug suspect. Saquilabon and two other policemen and a barangay tanod allegedly asked P20,000 from the mother of the drug suspect in exchange for his freedom.

Senior Inspector Porferio Gabuya Jr. has been appointed officer- in- charge of the Parian police precinct.

He assured that what happened with Saquilabon will not happen again. Police operations continue and the new policemen have familiarized themselves with the barangays under their jurisdiction: Barangay Day-as, Lorega, Kamagayan,San Antonio, T. Padilla, Zapatera and Parian.

Parian Barangay Captain Jeremias Nuñez revealed that agents from the Counter-Intelligence Task Force (CITF) visited his office Wednesday morning to inform him that one of his tanods was involved in extortion activities.

He said the team did not know the name of the barangay tanod allegedly involved but told him that if they could see photos, they would recognize him.

“I have doubts that the person they pointed to is one of my barangay tanods. But I also want to check whether the one I suspect is also the same person they suspect.”

Tanods receive a P1,000 honorarium from the barangay and P4,000 from the city government.

Meanwhile, Cebu City Mayor Tomas Osmeña said he was happy that the PRO-7 acted on misbehaving policemen in the city.

“I’m glad that they are cracking on the police. It’s not the first time. But I’m greatly encouraged by the move of the general in relieving all of them,” Osmeña said.

“I’m just waiting for information because all information I’m getting is also from newspapers. But if it’s widespread in the precinct, I will suspend their allowances,” he said. /With Doris May C. Mondragon

Read Next
State of calamity in Bgy. Basak Tamiya