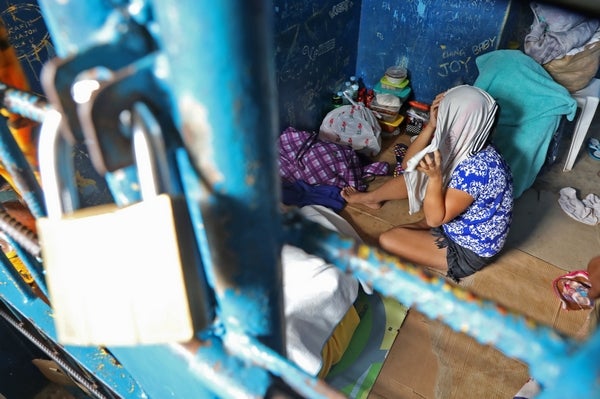 T hree sisters accused of putting up a cyberporn business are detained inside the Lapulapu City jail after their arrest.
(CDN PHOTO/TONEE DESPOJO)

“BIKTIMA mi, nganong na-apil man mi ana?” (We are victims how come we are now the perpetrators?)

This was the statement of one of the three female siblings who were accused of putting up their own cyberpornography business in Barangay Babag Dos, Lapu-Lapu City.

Melanie, 20, Megan, 18, and Jill, 16, (not their real names) were apprehended in a series of entrapment operations by the police that started Thursday afternoon.

Five minors were rescued, who were said to be victims of the alleged illegal activity of the three sisters. One of the rescued victims was Melanie’s 5-year-old daughter.

Melanie vehemently denied the accusations, saying she and her sisters would never do such a thing, especially to her daughter.

“Dili mi kahimo ana g’yud (We cannot do that especially to our own family),” Melanie told Cebu Daily News.

In an earlier interview, Senior Supt. Romeo Perigo, chief of the Women and Children Protection Center (WCPC) Visayas Field Unit, said the sisters were also victims of cyberpornography in Cordova town before they made a business out of it in Lapu-Lapu City.

Melanie and Megan, who are currently detained at the Lapu-Lapu Police Office (LCPO) precinct, vehemently denied these allegations.

Melanie said she got married and lived with her husband in Lapu-Lapu City with her daughter. She said Megan decided to live with her because she is three months pregnant.

Melanie and Megan refused to give further statements as they are still looking for a lawyer.

Jill is now under the custody of Department of Social Welfare and Development in Central Visayas (DSWD-7) since she is still a minor.

Perigo said that complaints for violating Republic Act 9208 or the Anti-Trafficking in persons and Republic Act 9775 or the Anti-Child Pornography Act in relation to the Cybercrime Prevention Act will be filed against the suspects on Monday.

Meanwhile, the Lapu-Lapu City government has formed a team to look into cybercrime in the city.

“Beware because we are monitoring them. Even if they are not from here but they are doing that in Lapu-Lapu, the more we are going after them,” said Lapu-Lapu City Mayor Paz Radaza.

Radaza said that the city government created Oplan Malasakit because of the continued arrests of these human traffickers.

(There will be teams who will go to every barangay and observe the women and children. We also urge residents to report any suspicious activities in their place so we can verify.)