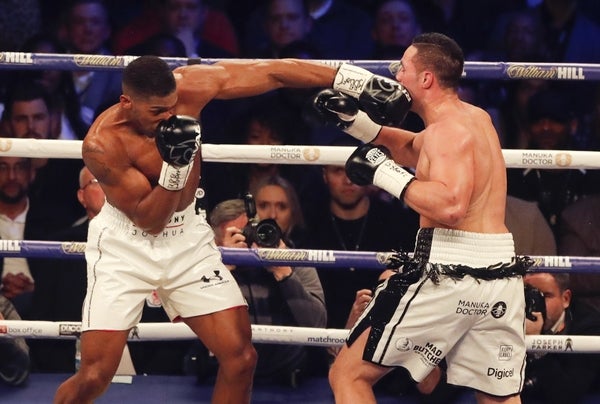 Cardiff, Wales — Anthony Joshua is a man in a hurry as he looks to unify the heavyweight division.

He needed to get through the longest fight of his career to collect the third of the big four belts, though.

The British fighter was taken the distance for the first time in his professional career against Joseph Parker on Saturday, beating the previously undefeated New Zealander in a unanimous decision in front of 78,000 fans in Cardiff.

It was Joshua’s 21st straight win and he added Parker’s WBO belt to his WBA and IBF titles.

“I’m not elated because I don’t let the highs get to my head. And I always think we’ve got to go again soon,” Joshua said.

“We are still hustling. We are on to the next one, in my eyes. It’s not time to sit back and enjoy the ride.”

And that only means one thing: Becoming undisputed champion by beating big-punching American Deontay Wilder, the WBC champion.

Renowned for his destructive punching power, Joshua showed another side to his boxing repertoire against Parker, whose movement, fast hands and counter-attacking ability made him a tricky opponent.

The jab was the key for Joshua against an often-retreating opponent. He barely landed a clean shot with his big right hand but he didn’t need to, despite the clamor from the crowd — and his mother watching from home who called for a knockout in the second or seventh round.

Neither Joshua nor Parker came close to getting knocked down, showing respect for each other’s undefeated records.

They hugged after the final bell, though Parker knew he had been beaten before the scores were announced.

Read Next
US Open champ plugs slump in Miami Open