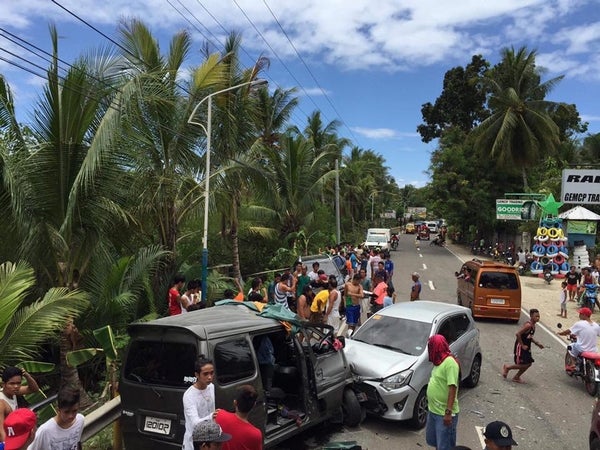 ARGAO ACCIDENT. Rescuers and bystanders mill around the counterflowing multicab that collided head on with an incoming vehicle at 10:50 a.m. on Sunday, April 15, 2018, in Barangay Taloot, Argao, Cebu. Three of the persons on board the multicab, a couple and their grandson, died in the mishap while four others on the same vehicle are in critical condition.

It was an outing that turned tragic for the Sillote and Villaces families when three of their kin died in a vehicular accident along the highway of Barangay Taloot in Argao town, 73 kilometers southeast of Cebu City, on Sunday morning.

The fatalities — Jose Aquillo Sillote, his wife, Virgilia, and one of their grandchildren, Vince Bryle Villaces, 4 — were all on board a multicab driven by the male Sillote that rammed into an incoming vehicle at around 10:50 a.m.

Villaces, 4, was declared dead on the spot. Virgilia, 61, was rushed by responders from the Argao Municipal Disaster Risk Reduction and Management Office (MDRRMO) to the Isidro C. Kintanar Memorial Hospital in Barangay Bogo, Argao, but attending physicians declared her dead on arrival.

Reports from the Provincial Disaster Risk Reduction and Management Office (PDRRMO) said that Jose Aquillo, 62, and four others who were critically injured in the accident were rushed to a private hospital in Cebu City but he did not make it alive.

Initial investigation from the Argao Police Station revealed that the family was on their way back to their home in Minglanilla town, also in southeastern Cebu, when the driver, Jose Aquillo, counterflowed and crashed into an incoming six-wheeler truck driven by Leonel Judith Co, 31.

“All the individuals inside the multicab are residents of Minglanilla town, and was returning home from an outing in Oslob town,” said PO2 Clifford Butron, chief investigator from the Argao Police Station.

In an interview with reporters, Co said he was surprised to see the multicab counterflowing and heading to his direction, and his attempt to swerve away from it made him lose control of the truck he was driving.

As a result, Co said his truck careened into a thicket of mangroves beside the road. Fortunately, he only sustained minor wounds.

“The driver of the multicab switched lanes. He was so near when he did that and I had no choice but to steer the truck away from it and into the mangroves ahead. And that’s when I lost control,” he said in Cebuano.

Meanwhile, Butron said two other cars were also damaged as a result of the collision.

Butron said a Toyota Wigo and the Kia Sorento, both bound for Cebu City, were trailing close behind the multicab, and did not have the chance to slow down when the collision happened. Fortunately, the drivers of the two vehicles were unharmed.

The accident also resulted to slight traffic in the area, said Butron.