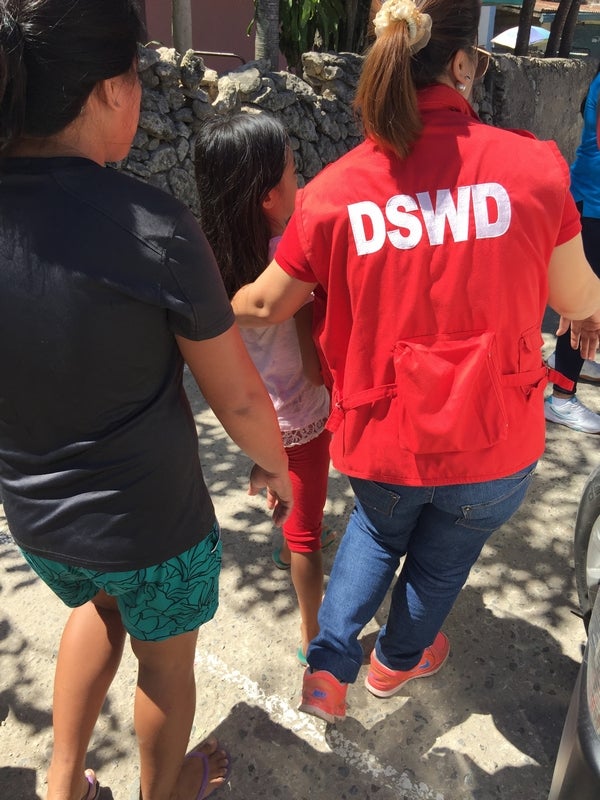 Anti-cyberporn operatives and DSWD personnel rescue this young girl from an online sex den in Cordova town and arrested a female trafficker yesterday. Two other girls were also rescued.

IN CORDOVA AND TALISAY CITY

Melinda (not her real name), 25 was collared by operatives of the Women and Children’s Protection Center (WCPC) Visayas Field Unit while doing her illicit activity inside her house in Cordova town.

The police were able to rescue two girls, aged six and 11, from Melinda’s home.

Two young boys, aged two and eight, were also found inside her house but police are yet to determine if they too were victims.

“The two-year-old boy is her (suspect’s) son,” said Perigo. Melinda is a single mom.

The police also conducted a follow-up operation in Talisay City and rescued another victim – a nine-year-old girl who was also used by the suspect in her illegal activities.

According to the International Justice Mission (IJM), the suspected trafficker had offered to sexually abuse the girls and to livestream the abuse to foreigners for P3,000.

She even boasted of having access to six young children who she could force to do sex acts in exchange for money.

Now that these children are rescued, they can be safe from more sexual abuse and also receive therapy to heal from this traumatic experience,” said Atty. John Tanagho, IJM Cebu field office director.

He also urged anyone who has information about the abuse of children in cyber-pornography or so-called sex shows to immediately get in touch with the WCPC.

On her part, Cordova Mayor Mary Therese Sitoy-Cho said that she is saddened that some of her constituents are still engaged in cyber pornography despite their warnings.

“Victimizing our women and children truly breaks our heart. However, the arrest of the perpetrators is also a relief and very welcome operation because this helps us in our fight against this menace. Cordova, in our own way, continues to fight cyber pornogaphy by religiously doing our counter measures. We will not stop the fight until this crime will be totally eradicated,” Cho told CDN.

Aside from the WCPC-Visayas, the operations in Cordova and Talisay were supported by the Anti-CyberCrime Group Region 7, the Provincial Women and Children’s Protection Desk (WCPD), the Department of Social Welfare and Development (DSWD) Region 7, and IJM.