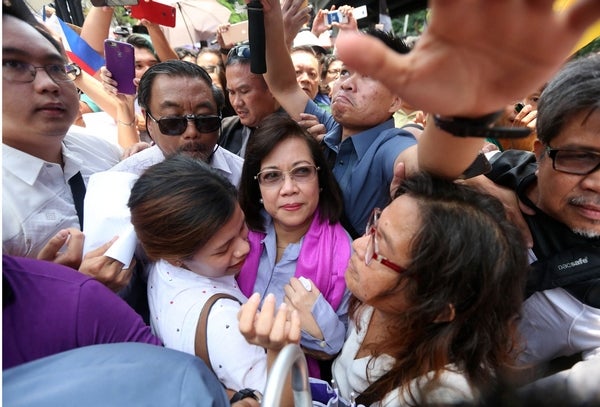 OUSTED Supreme Court Chief Justice Ma. Lourdes Sereno meets with her supporters after the SC voted 8-6 on Friday, May 11, 2018, in favor of the quo warranto case filed against her.

“The decision was nothing but a mockery of justice. Democracy in this country is, in a way, dead,” said Jaime Paglinawan, chairperson of Bayan Central Visayas, in an interview.

A retired judge and some Cebuano lawyers also expressed surprise at the decision of the country’s high tribunal that circumvents a key provision of the Philippine Constitution in removing impeachable officers like the chief justice.

Crossing party lines, several senators “disagreed” but respected the high court’s decision to oust Sereno, as they asserted the power of Congress over impeachable officers like her.

“I maintain that you can only remove the Chief Justice thru impeachment. I disagree with the majority decision of the Supreme Court. Bad precedent,” Senate President Pro Tempore Ralph Recto said in a statement.

In a historic move, the high court ousted Sereno on Friday on the basis of an invalid appointment for failure to submit a complete statement of assets, liabilities, and net worth (SALN), which was among the requirements set by the Judicial and Bar Council (JBC).

Voting 8-6, the SC en banc granted the quo warranto petition filed by Solicitor General Jose Calida — the principal lawyer of the government — which questioned the qualification of Sereno to serve as the country’s top magistrate.

“Wherefore, the Petition for Quo Warranto is granted. Respondent Maria Lourdes P. A. Sereno is disqualified from and is hereby adjudged guilty of unlawfully holding and exercising the office of the Chief Justice,” read the dispositive portion of the high court’s decision.

“Accordingly, respondent Maria Lourdes P. A. Sereno is ousted and excluded there from … The position of the Chief Justice is declared vacant and the Judicial and Bar Council (JBC) is directed to commence the application and nomination process,” the high court said.

On Friday, SC justices held a special en banc session, which Sereno initially presided over. Sereno consequently inhibited herself from the meeting once the en banc opened its deliberation on the quo warranto petition.

The decision was immediately executory without the need for further action from the Court, said SC spokesman Theodore Te.

The camp of Sereno will contest the high court’s ruling.

“We’re now considering filing a motion for reconsideration” said Sereno’s lawyer Josa Deinla in an interview over dzMM shorty after the reported ouster of the chief justice.

Sereno, in a statement, said she didn’t lose the battle after all.

“Panalo po tayo (We won),” the beleaguered chief justice said in front of thousands of her supporters who gathered in front of the SC moments after the high tribunal nullified her appointment.

Sereno said six of the eight justices, who voted in favor of the quo warranto petition against her, were “biased” and should have inhibited from the voting.

“Thanks be to God. Our battle spread out. The six justices should have inhibited themselves and so, if you think about it, we won,” she said as the crowd cheered.

Sereno underscored that her fight to defend democracy would continue now more than ever.

She chided the eight magistrates, who voted to disqualify her, saying: “Inangkin nila ang tanging karapatan ng Senado. (They claimed the right that is solely entrusted to the Senate).”

“They boldly violated their oath to take care of the Constitution, and in effect destroyed the judiciary.”

The former top magistrate thanked her supporters for always standing by her side.

“I know you are sad. If only, I can wipe away the tears from your eyes. I wish to hug and thank each one of you,” she said.

“This day is not about me. This day is about everyone, especially those who experienced persecution,” she added.

The SC decision on the quo warranto case against Sereno, he said, is an attack to the Constitution and judicial independence, destroying the “checks and balances” principle of a democratic government.

“They (administration) know they cannot convict Sereno in a Senate impeachment that is why they connived with the justices who had personal issues with the chief justice,” he told Cebu Daily News.

“After this, what more will stop Mr. (Rodrigo) Duterte from ousting other justices who expressed opposition in some of his programs?” he added.

After Sereno, Isles said he won’t be surprised if the administration would target Senior Associate Justice Antonio Carpio because of the latter’s opposition to the joint venture of Philippines and China in the West Philippine Sea.

“This is a sad day for the judiciary and the legal profession. Goodbye, judicial independence and impartiality,” he said in a separate interview.

Paredes said a quo warranto proceeding is not the proper and legal way to remove an impeachable officer like the chief justice as the Constitution clearly states that the only remedy on erring constitutional officers is a conviction in an impeachment proceeding.

With the ouster of Sereno, Paredes said the SC can expect several quo warranto cases against constitutional officials such as the justices, commissioners of the Commission on Elections, Human Rights (CHR), the Ombudsman, courts and even the president himself.

“The floodgates for quo warranto cases are now open,” he said.

Paredes, who hanged up his robes in 2014 after serving 27 years in the judiciary, said the six justices who earlier made public statements against

Sereno should have inhibited themselves from deciding on the quo warranto case.

“How can you expect these justices to vote impartially when they themselves had expressed their opinions prior to the judgment?” Paredes said.

Veteran lawyer Democrito Barcenas said the high court’s ruling on Sereno’s case was not just a bad birthday present for him but a sad news for Philippine democracy.

“This is a day of infamy. The justices who voted in favor of the quo warranto petition have trampled the Constitution,” he said.

“It’s very clear that the only means to remove a sitting chief justice is by impeachment in the Senate. These justices did not only betray Sereno but the entire constitutional system. It’s really a sad day, not only for lawyers, but for the entire Filipino people who love democracy and the rule of law,” he added.

Lawyer Jose Glenn Capanas, president of the Integrated Bar of the Philippines (IBP) Cebu City chapter, said he respected the ruling of the high court on Sereno’s case although it presented new principles and jurisprudence.

“As officer of the court, I have to abide by the decision and let the legal process take its course. I believe Chief Justice Sereno still has the legal remedies,” he said.

“There are principles that were overridden by this ruling. This is something very new. It might shake the judicial system. But as it is, I am for judicial independence,” he added in response to insinuations that some justices may have been influenced by the executive department to oust Sereno.

Lawyer Mundlyn Misal-Martin, president of the IBP Cebu province chapter, said the decision of the SC to oust a constitutional officer through a quo warranto case was “surprisingly new.”

“I haven’t read the decision and it’s best to read it first to render an in-depth personal opinion of the issue. The latest jurisprudence is new and the first, I believe, issued by the SC,” she said.

“The newly issued decision is something that I look forward to read and learn. At any rate, I have high respect to the members of the highest court of this country and they are intellectually capable to decide on matters raised to them. With that, I believe that they have basis to it. And I personally respect that,” she added. / WITH REPORTS FROM BENJIE B. TALISIC, JESSA O. SOTTO AND CNU INTERN MAEJANE DUNGOG