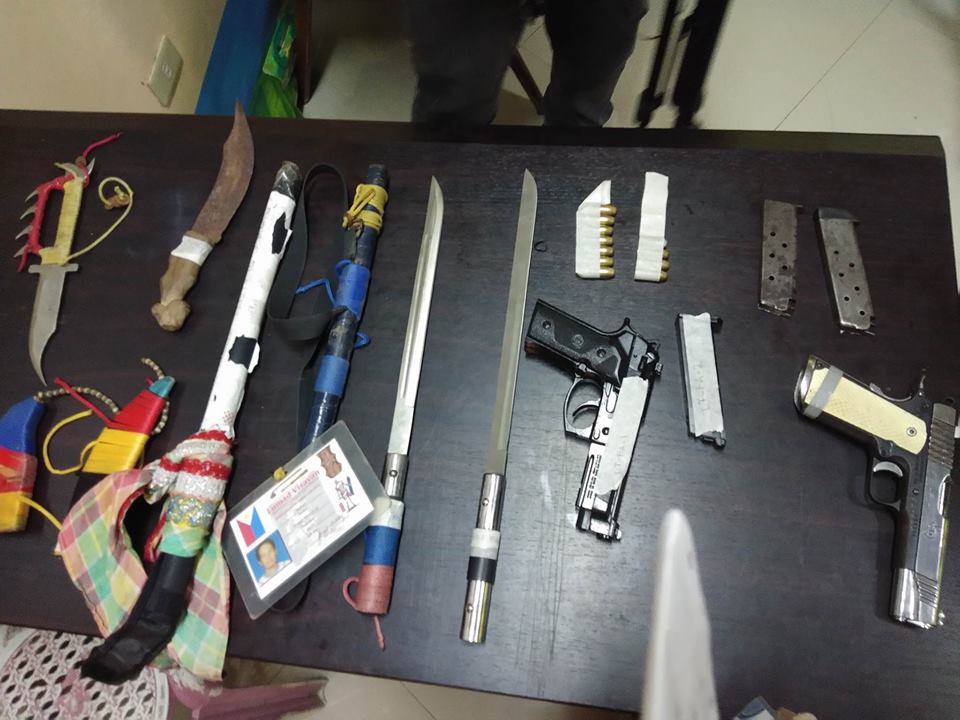 The firearms and bladed weapons that were confiscated from the six suspects. /Fe Marie Dumaboc

LAPU-LAPU CITY policemen who responded to a reported sighting of two armed men in Sitio Paradise in Barangay Pajo, Sunday night, ended up arresting a total of six men who were armed with handguns and bladed weapons.

Police Senior Inspector Joey Bicoy, chief of the Hoopsdome police station, said they received a call from a concerned citizen on the presence of the armed Almeda and Tampus who were seen loitering on Sitio Paradise past 9 p.m. on Sunday.

He said Almeda was armed with a .45 caliber pistol with two magazines while Tampus was holding a replica of a 9 mm pistol during their arrest.

“They said that they needed the guns for their protection,” Bicoy said.

Policemen who responded to the armed person alarm also chanced upon the four others who possessed bolos while they sat outside of their church while they await for their other companions to arrive.

Bicoy said the four reasoned that they were members of the Alimaong and Masulogun tribal group who were scheduled to attend the baptism rites of a “Datu.”

They claimed that they needed the bladed weapons to use during the baptism, he said.

The six men were detained at the Lapu-Lapu City Police Station detention cell while police prepare a complaint for the violation of the election gun ban against them.