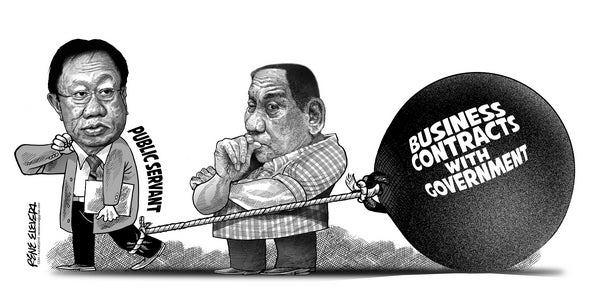 Malacañang has been dismissive of calls for the government’s chief lawyer, Jose Calida to resign.

The presidential palace and the solicitor general’s other defenders say he is being unfairly targeted by critics since he filed the quo warranto case at the Supreme Court that led to the removal of Chief Justice Maria Lourdes P.A. Sereno.

The basis for public clamor for Calida to step down, however, is the perception that he is in a position of conflict of interest.

He remains the owner of 60 percent of his family’s security agency.

This company has bagged multimillion-peso contracts with various agencies and offices of the government, including the House of Representatives.
Calida said he has not done anything illegal since he resigned from his position in the agency before the President appointed him to lead the Office of the Solicitor General.

What does the law say to a public official in cases of conflicts of interest? According to officialdom’s Code of Conduct: “When a conflict of interest arises, he shall resign from his position in any private business enterprise within thirty (30) days from his assumption of office and/or divest himself of his shareholdings or interest within sixty (60) days from such assumption.”

Calida rested his defense on the word “or.”

He said he has complied with the law which, according to him, gave him the choice whether to divest himself of shares or resign from his position in Vigilant Investigative and Security Agency, Inc.

The word used in the law, however, is not a simple “or” but “and/or,” a wording just like “or” whose meaning, contrary to Calida’s claim, is still debated among scholars of statutory construction.

Does not “and/or” indicate that the intent of the law is to bid the public official concerned to also divest himself of ownership if he has already resigned from his position in a private firm?

It it does not, then it seems the law leaves room for naivete: A public servant who owns 60 percent of a private firm can be taken to have no conflict of interest.

He may let his private business seek government contracts as long as he can display that he has no position but that of majority owner in the firm.

Ownership of a company minus a designation equals disinterest in it?

Read Next
‘Raise your voice, not the sea level’