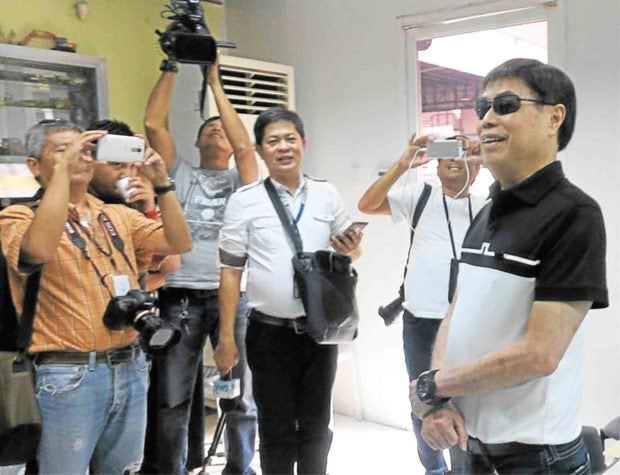 Businessman Peter Lim during a short press conference at his office in Hilton Motors in Mandaue City. Although he appears to be calm, he admits he fears for his life after being linked to the drug trade. INQUIRER file photo. ADOR VINCENT MAYOL

Cebu-based businessman Peter Lim told the Supreme Court that the Department of Justice’s (DOJ) reinvestigation of the drug case against him “smacks of persecution, harassment and oppression.”

In a 48-page petition, Lim wants the high court to nullify the order of then Justice Secretary Vitaliano Aguirre to conduct a reinvestigation of the complaint filed against him and several others despite a resolution dismissing it for lack of evidence.

“The State cannot be allowed to resort to improper methods calculated to produce a wrongful conviction,” read the petition.

The DOJ has already dismissed the case against Lim, self-confessed drug distributor Kerwin Espinosa, convicted drug lord Peter Co and several others for lack of evidence.

The complaint was dismissed, citing the inconsistencies in the testimony of one of their co-respondents, Manuel Adorco. The DOJ, in the previous resolution, noted that the Philippine National Police-Criminal Investigation and Detection Group (PNP-CIDG) failed to produce corroborating evidence to support Adorco’s testimony.

The police filed a motion for reconsideration while Aguirre created a new panel of investigators to reinvestigate the complaint.

With the new preliminary investigation, Lim told the high court that “the DOJ essentially coached the CIDG to ‘beef up’ its evidence against petitioner to justify the filing of an Information for a non-bailable offense against him.”

“This is not far-fetched considering that the State had already painted petitioner [Lim] as a ‘drug lord’ despite the utter lack of evidence against him, as correctly found by the first Panel of Prosecutors,” the petition to the Supreme Court stated. /Inquirer.net

Read Next
Tomas looks to Mandaue plastics ban as benchmark