Meet the couple behind the hit song “Balay ni Mayang”

If you haven’t heard of their song, you must be living under a rock. The contemporary Bisdak song “Balay ni Mayang,” third place winner in last year’s Visayan Pop Music Festival, is a  massive hit in the Visayas and Mindanao, but it’s also getting plenty of airtime in Manila—a popular track among Cebuanos everywhere, perhaps because of its plaintively resonant “good vibes” and folksy feel that could only come from one place—the heart.

Two young lovers, both 19, collaborated on  creating this good music. He is one-third of the popular brothers trio  The Wonggoys, and she, a bit player in the local TV 5 series “Antigo.” In this digital age governed by  influences of pop culture, it’s amazing how these teeners convey in  their mother tongue. What started as love’s first blush becomes a living testament, and in the words of the poet Rainer Marie Rilke, “the ultimate, the last test and proof, the work for which all other work is but preparation.” 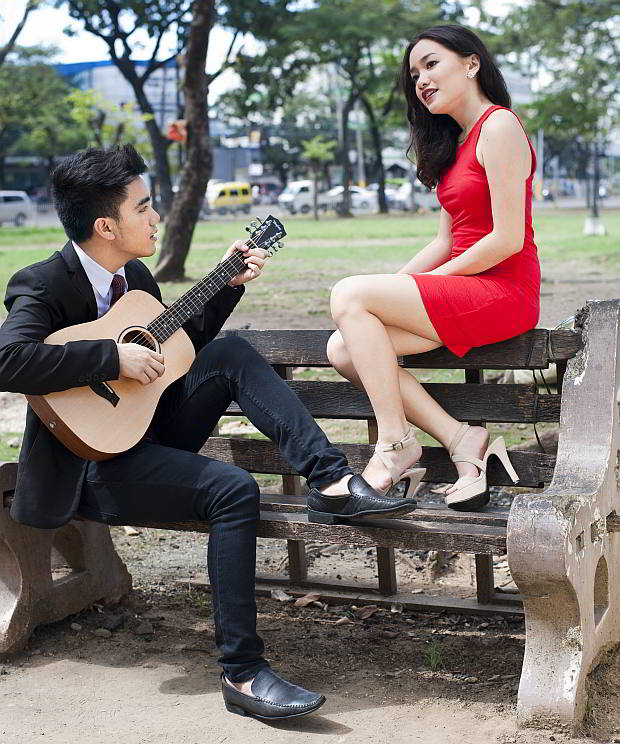 HOW DID YOU MEET?

Marianne: I met Kyle in my graduation ball. He was one of the performers. I still remember what he sang—“Sunday Morning” by Maroon 5. This was in April 4, 2011.

Kyle: I was invited to the STC Ball 2011. They asked me to sing a couple of songs. I was chosen as “Best Dressed Male” while Marianne was awarded “Angel of the Night”—and I totally agree because she was the most beautiful girl in the room. The following week, Marianne chatted with me on Facebook. She told me that she  really liked the way I sang. Of course kilig kaayo ko, so I told her how pretty she was that night. That’s how we started talking.

WHAT ATTRACTED YOU TO EACH OTHER?

Marianne: His voice. And his humor. Kyle never fails to make me laugh.
Kyle: She has been my  crush since high school. A friend showed me her picture on Facebook and I really found her pretty. A few years later, imagine your crush chatting with you. When we started hanging out, I realized that she’s one cool, sweet girl.

Marianne:  Boys have different ways of courting. There are some suitors who go to  the girl’s house, and some who usually sends texts or like hanging out at the malls. Kyle would go to my place. Sometimes he sings for me. 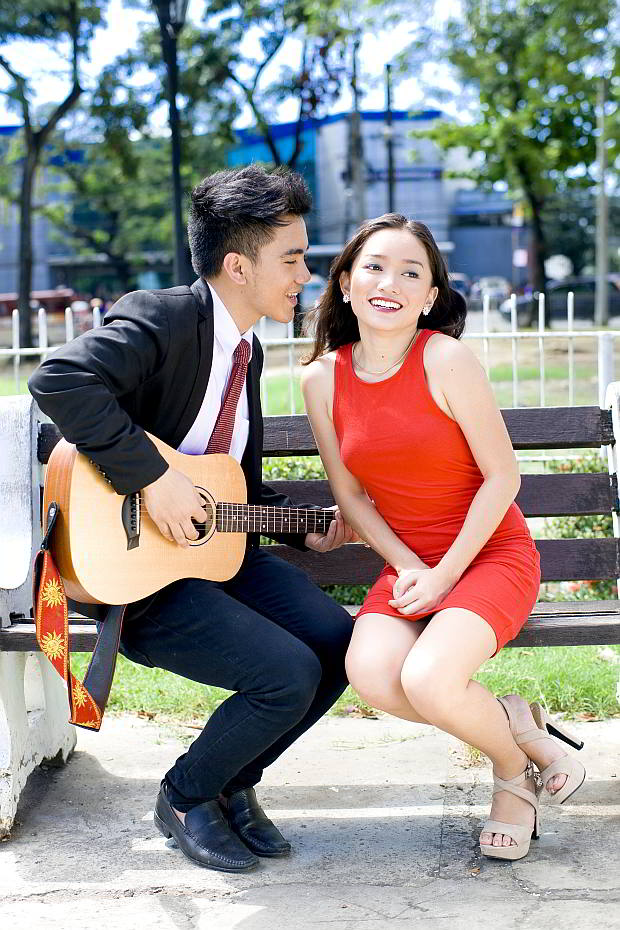 IS IT EASIER THAT YOU ARE BOTH MUSIC LOVERS?

Kyle: Yes. Music actually brought us together. If I didn’t sing during their ball, I don’t think she’d notice me that night. (Smiles)

Marianne: It was my idea to join Vispop. When I told Kyle about it, he said he’d be very glad to help. And so we decided to write something about us.

Kyle: On my way to her house as I was driving, I made this catchy tune in my mind.  We didn’t know what to write about yet, so we thought: “Unsa man atong buhaton most of the time together?” Mayang’s parents are really strict so  I visit her at home ‘cause her parents won’t allow her to go out most of the time. I guess we just wrote from experience. Honestly, we wrote the song for like an hour, then recorded a demo on my laptop.

WHAT’S THE MOST SURPRISING REACTION YOU GOT WHEN PEOPLE LEARNED YOU GUYS DID THE SONG?

Marianne: I have a friend who goes to school in Manila and he brought his friends here for  Sinulog.  I didn’t know his friends were big fans of the song and they  went to the house to have a photo with me. It is great seeing other people especially those who are not from Cebu appreciate your music.

Kyle: The most bizarre reaction I got happened  recently at a photoshoot. A make-up artist liked the song a lot. Her hands were shaking while applying my  make-up.

AND THE BIGGEST COMPLIMENT?

Kyle:  “It’s the cutest Bisaya song ever written by the cutest couple.”

DID YOU EXPECT IT TO BE A MONSTER HIT?

Marianne: Not at all. The whole point of joining Vispop was  for fun.

Kyle: We were very surprised.

WHEN CAN YOU SAY THAT YOU HAVE ARRIVED IN THE MUSIC SCENE?

Marianne: When your songs is  already available in videoke joints.

Kyle: When there are many covers of the song on YouTube.

DO YOU HAVE A FOLLOW-UP SINGLE ALREADY AS A COUPLE?

Kyle: Well,  we have songs for each other that we keep to ourselves. 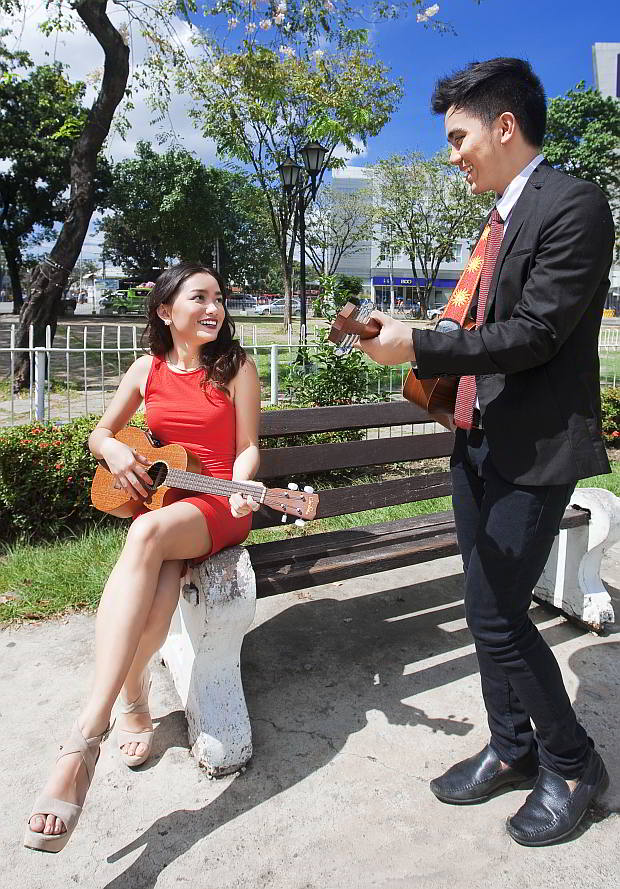 WHO ARE YOUR MUSICAL INFLUENCES?

Kyle: The Weepies, local artists from Cebu like Cattski Espina and other composers of Bisaya songs.

DO YOU HAVE LQs (lovers quarrel) ON MUSIC-RELATED STUFF?

Marianne: No. At times we fight over what music to play in the car.

TO BORROW THE LINE… HOW DO YOU KEEP THE MUSIC PLAYING?

Kyle: We’re just like  other couples.   We go on dates, watch movies once in a while. All my free time I’d spend with her. Whatever comes.

IS THERE A SONG YOU WISHED YOU COMPOSED YOURSELF?

WHAT IS YOUR DEFINITION OF LOVE?

Marianne: When you become selfless—that’s love for me. It is doing things not just for yourself but also your partner. It  comes naturally. Sometimes you just forget about yourself because you want to give all your attention to that one person.

WHAT’S A DEAL-BREAKER FOR YOU?

Marianne: When Kyle insists he is right even though he is not.

Kyle: Lying and cheating, of course. I’m the type who makes her do anything she wants as long as she tells me.

IF YOU CAN PLAN YOUR DREAM WEDDING, HOW WOULD IT LOOK LIKE?

Marianne: I want a simple wedding, with  my family and close friends  there. Honestly, I still don’t know how my wedding would look like. But I’m sure  it would be perfect— marrying the person I truly love.

Kyle: I think Marianne will  be the most beautiful girl you will ever see. 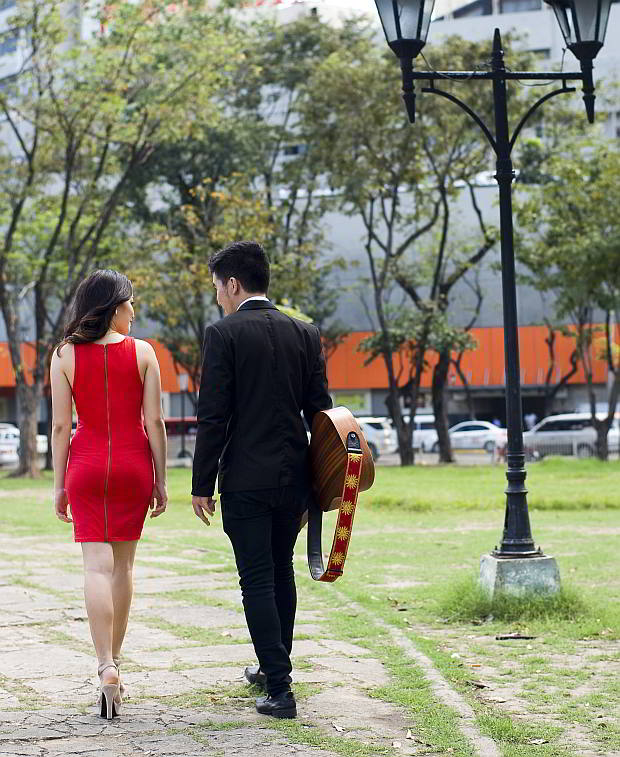