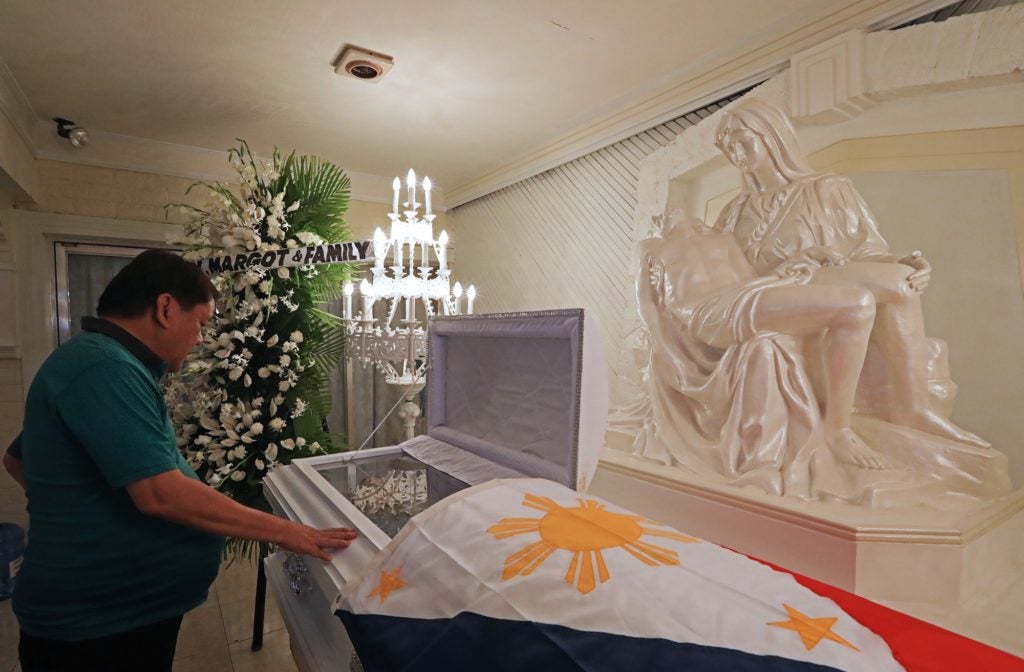 Cebu City Mayor Tomas Osmeña views the body of his trusted close-in security, SPO1 Adonis Dumpit, which arrived yesterday from Bohol where he was killed in what authorities claim to be a legitimate drug bust. /CDN PHOTO

Dumpit’s son appeals to law enforcers not to taint his father’s memory, says policeman not involved in drugs

He may not be the perfect father and the best policeman.

But the only son of SPO1 Adonis Dumpit maintained that the police officer was not capable of betraying the government by getting involved in illegal drugs trade.

“Do not taint my father’s memory. Since you already claimed his life, then stop the accusations. He’s not the best police officer but at least he did a lot of good things while he was in the service,” he said in Cebuano during an interview after his father’s body arrived at the Cosmopolitan Funeral Homes in downtown Cebu City past 10 a.m. on Thursday.

Dumpit, who was tagged in the deaths of crime suspects in Cebu in early 2000, was killed in an alleged shootout with operatives of the National Bureau of Investigation (NBI) and the Regional Intelligence Division (RID) in Barangay San Isidro, Tagbilaran City, Bohol, on Wednesday.

According to the NBI-Bohol, their investigation showed Dumpit was a drug courier and a drug coddler while he was assigned in Bohol.

His family, however, denied the accusations, saying Dumpit’s lifestyle would prove that he was never involved in the narcotics trade.

“They said he was a drug protector or a high-value target? I don’t believe them,” Norman Vincent said.

The psychology student said that whenever he visited his father in Bohol, the policeman would only offer him fish even if Dumpit knew he didn’t like eating fish.

“He (Dumpit) could not even buy the food he liked,” Norman Vincent pointed out.

Dumpit and his wife Josephine separated in 2007, and their civil marriage was annulled the next year.

Although they hadn’t communicated for years, Josephine said she too could not believe the allegations that Dumpit was involved in the illegal drugs trade.

“I was shocked. If they (NBI) say that they recovered illegal drugs from his (Dumpit) possession, then I would respect that. But as it is, I do not believe them,” she said.

Josephine, now an employee of the Cebu City Treasurer’s Office, said she was hurt when Dumpit left her 11 years ago, but she did not have any ill feelings toward him.

“Ang among taytayan nga naputol niadtong 2007, gisumpay pagbalik karon, pero padulong na sa pikas kinabuhi (The bridge that connected us was cut off in 2007. It was reconnected now but toward the next life),” said Josephine who was married with Dumpit for 15 years.

“He was not perfect, but we knew how hard he tried to run after every criminal in the city,” she added.

It was Josephine’s decision to bring Dumpit’s body back to Cebu where he would be laid to rest.

The interment had yet to be set as the family planned to consult with Cebu City Mayor Tomas Osmeña who promised to shoulder all the expenses.

“Even if he (Dumpit) already has a live-in partner in Bohol, I still have the right to decide (where he will be buried) because I am his real family,” she said.

In a separate interview, Amores said Dumpit also adopted 10 other children who lived with them in Bohol.

Despite the difficulties they encountered, she said they never thought of engaging in illegal drugs.

“Wala jud na ana. Nag-agwanta mi sa among kinabuhi nga nagpuyo nga malinawon. Putlan man gani mig kuryente (We were never into drugs. We endured life’s hardships in order to live in peace. There were even times when our electricity was cut off),” she said.

Amores, a college sweetheart of Dumpit, believed some people wanted Dumpit dead because he was active in the anti-illegal drugs campaign.

She said Dumpit explained to her why he was transferred from Cebu to Bohol.

“Mapagan ko permanente sa away sa mga higante (I was always caught in the crossfire between giants),” Amores, 45, quoted Dumpit telling her.

Amores said she believed Dumpit was ambushed to silence him.

She admitted that she felt something strange when Dumpit was about to leave their house in Barangay San Isidro, Tagbilaran, on Wednesday morning.

“I hugged him tightly,” she said.

Amores said Dumpit left the house early to attend a briefing at Camp Francisco Dagohoy, headquarters of the Bohol Provincial Police Office, to prepare for the visit of President Duterte in the province on Thursday.

She said Dumpit brought his police uniform and the book that he was asked to photocopy.

Moments later, Amores said she heard a volley of gunshots outside their residence but dismissed it, thinking that it was just fireworks.

One of their adopted children later informed her that Dumpit was killed along F. Dagohoy Circumferential Road in Purok 1, Barangay San Isidro, about 200 meters from their rented house.

Amores said she believed that the 15 sachets of shabu recovered from Dumpit’s pants were planted. But lawyer Rennan Augustus Oliva, chief of the NBI-Bohol, maintained that Dumpit was killed in a legitimate operation.

“They (Dumpit’s family) have their opinions. But it was very clear that the subject engaged our operatives in a shootout, and we have witnesses to prove it,” he said.

Dumpit was subjected to a paraffin test to prove that he fired a gun. Test results, including the autopsy report, were not yet available on Thursday. Oliva said Dumpit’s cellular phone would be examined by the NBI.

The NBI-Bohol chief said they would trace and go after Dumpit’s contacts in the illegal drugs trade. Based on their monitoring, he said Dumpit had underlings operating in Tagbilaran City and nearby towns.

Oliva said they already had the identity of the person who provided Dumpit with illegal drugs, but he refused to reveal pending ongoing investigation.
“Let’s see what information we can use in our future anti-drugs operations,” he said.

Oliva stressed that the information that Dumpit was a “narco-cop” first came from the police, particularly the Criminal Investigation and Detection Group, and not from the NBI.

“Whatever information we get, we don’t accept that as it is. We verified it. We exchanged notes with other units and conducted actual surveillance. But what can we do, the subject (Dumpit) was really into illegal drugs,” he said. /with reports from Ador Vincent S. Mayol, Jessa Mae O. Sotto and Benjie B. Talisic

Your subscription could not be saved. Please try again.
Your subscription has been successful.
Read Next
Not even an expression of sympathy from Dumpit’s fellow cops, according to his family