Palma not keen on having police bodyguards 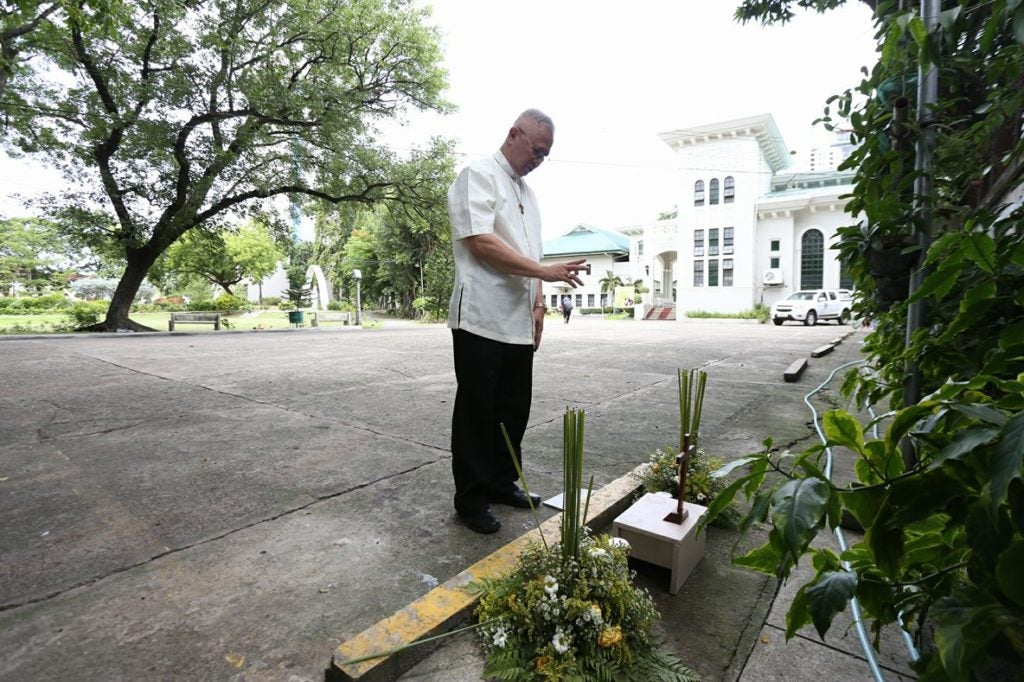 Cebu Archbishop Jose Palma spends some time in prayer at the spot where an armed man was killed in what police said was a shootout inside the Archbishop’s Residence compound last Tuesday. | | Junjie Mendoza

Saying he has nothing to fear except God, Cebu Archbishop Jose Palma has put aside suggestions to provide him police bodyguards.

“Honestly, there is nothing that I should be afraid of. I am not a saint, but I believed I have not done anything that would invite people to go after my life,” he said in an interview after he spent a few minutes to pray at the spot where an armed man was killed in what police said was a shootout inside the Archbishop’s Residence compound last Tuesday.

“Personally, I don’t think I need close in bodyguards. I’m really uncomfortable about it,” he added.

But if the police will insist, the 68-year-old prelate said he has to obey.

“If they believed that some precautionary measures have to be done, then let them have their way. If a similar incident will happen in the future, I also don’t want the police to be blamed,” he said.

Last Tuesday, an armed man identified as Jefrey Cañedo was gunned down by operatives of the Mobile Patrol Group when he allegedly tried to engage them in a shootout inside the Archbishop’s Residence compound in Cebu City.

Cañedo, a former overseas Filipino worker, reportedly wanted to talk to Palma to purportedly get the prelate’s advice about his troubled marriage.

Palma was not around that day because he flew to Manila to attend the 117th Plenary Assembly of the Catholic Bishops’ Conference of the Philippines (CBCP) over the weekend.

While on his way out of the compound, Cañedo, who allegedly had a gun tucked on his waist, was met by policemen who were alerted by employees of the archdiocese.

Cañedo allegedly refused to talk to the police and instead decided to shoot it out with the operatives.

Palma said he was shocked when he was informed by his aides about the incident.

“I feel sad because accordingly he just wanted to seek my advice although it felt strange why he had a gun with him. Whatever the circumstances are, we don’t want a person to die,” he said.

Palma briefly returned to the Archbishop’s Residence in Cebu City past noon on Thursday for a meeting and to preside over a wedding before he flew back to Manila in the afternoon for another engagement.

Once he goes back to Cebu, he said he will visit the wake of Cañedo in Barangay Tungkil, Minglanilla, south Cebu.

“I already talked to his (Cañedo) father over the phone to express my condolences and I was impressed by how respectful the father was,” Palma said.

“I’m praying for his (Cañedo) soul and for his family too,” he added.
Cañedo’s burial is set on July 20.

Despite the shooting incident inside the Archbishop’s Residence, Palma said the Church will continue its mission in saving souls and bringing people closer to God.

“I assure the people that the Church will always be here for everyone,” said the archbishop of the biggest archdiocese in the Philippines.

Your subscription could not be saved. Please try again.
Your subscription has been successful.
Read Next
Pacquiao fight, World Cup Finals to be aired live at Cebu City Sports Center for free