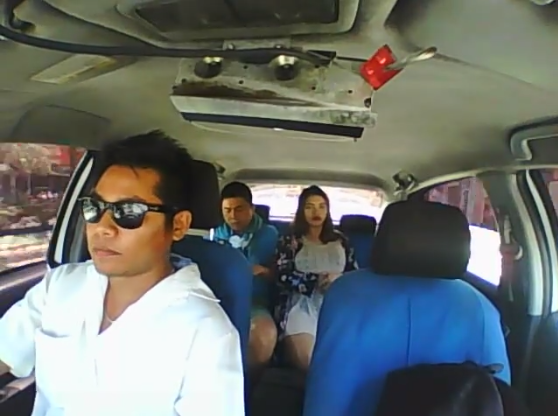 Two videos which recorded the incident inside the taxi were posted on Facebook by the driver, Rodrigo Banguiran Jr., on Friday (July 13).

Captured by the taxi’s dashboard camera, one of the videos showed the heated exchange between the driver and Police Supt. Roldan Daniel.

For three days, Banguiran was detained at Centro police station for grave coercion and unjust vexation.

An official report from the Mandaue City Police Office (MCPO) stated that Daniel and his companion were on board a taxi along Sangi Road in Barangay Pajo, Lapu-Lapu City.

The police officer told the 26-year-old driver to drop off his companion at a commercial complex Barangay Basak, Lapu-Lapu City before going to Mandaue City.

Banguiran and Daniel had an argument after the taxi driver had reset his meter for another trip to Mandaue City.

Daniel insisted that the taxi meter should not have been reset since they only dropped off his female companion and that should not be counted as one trip.

The videos posted by the taxi driver went viral online since its posting.

The Land Transportation Franchising and Regulatory Board in Central Visayas (LTFRB-7), however, clarified that taxi drivers may restart their meters in every drop off point.

LTFRB-7 Regional Director Ahmed Cuizon said that each destination or drop off point of a taxi is considered as one trip.

He added that a new flag down rate for the next drop off point should be applied.

“It would be unfair for drivers if a group would say that it’s going to be a continuous trip because that would take too much of their time and fuel,” Cuizon told Cebu Daily News in a phone interview.

Cuizon said that a trip with more than one destination can only be given a continuous meter reading if the driver has agreed beforehand.

“The decision is actually up to the driver if he decides to just have it as a continuous trip or a new one. But technically, a driver can reset the meter every after drop-off point regardless if the drop-off point is off or on the route going to the main destination,” Cuizon added.

Read Next
Four nabbed in drug busts in Cebu City