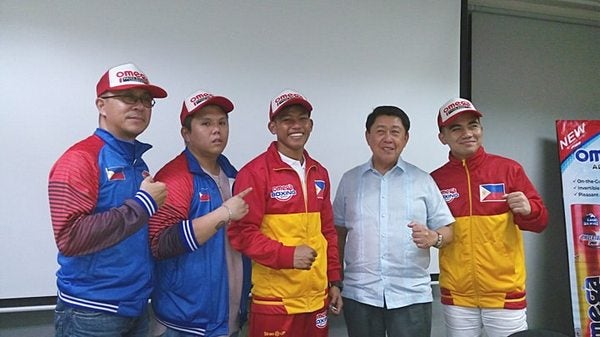 Jhack Tepora with his trainers and managers during a press conference at the International Pharmaceutical Incorporated (IPI) office in Mabolo. / Glendale Rosal

The 23-year-old Cebuano is coming off a ninth-round technical knockout victory over Mexican Edivaldo Ortega last Sunday in the co-main event of the Pacquiao vs. Matthysse showdown at the Axiata Arena in Kuala Lumpur, Malaysia.

Calatrava is not sure if Santa Cruz is next in line for Tepora, but said his ward will be included in the fight card of Pacquiao’s first title defense this November.

“We are expecting [the remaining three fights] to be big fights so Jhack better be ready,” said Calatrava in a presser yesterday at the International Pharmaceuticals Incorporated (IPI) office in Mabolo. “We at OPSI will prepare him for these upcoming fights and if he fights impressively, we hope he will earn a world title fight against Santa Cruz.”

Calatrava said Pacquiao is looking at Macau in China, Dubai in the UAE, and Hong Kong as possible venues for his first world title defense either this November or December.

Tepora said he is ready for the upcoming challenges.

“I will train harder and improve my skills so that I will become a better boxer and fullfill my dream of becoming a world champion,” said Tepora, a native of Danao City, north Cebu. “Right now I will take a short rest and celebrate. But I will be back in the gym very soon,”

Tepora has 22 wins, 17 by knockouts, and still no loss. He returned to Cebu yesterday and was given a hero’s welcome and a motorcade from the Mactan Cebu International Airport to the IPI office.