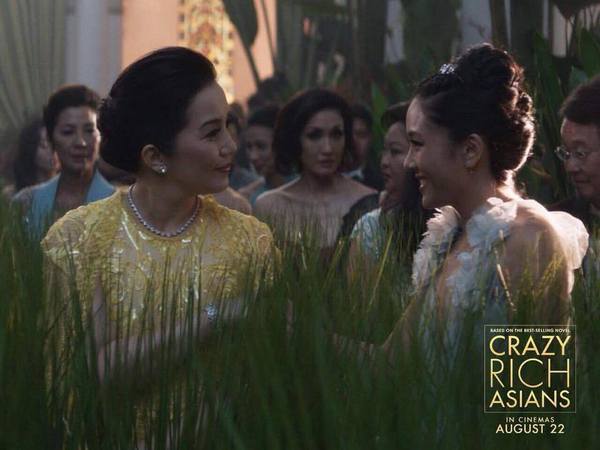 QUEEN of All Media Kris Aquino gave her fans and followers a sneak peek of her look for the upcoming international film, “Crazy Rich Asians.”

In an Instagram post. Aquino shared a photo of her with lead star Constance Wu who plays Rachel in the film.

“Ito na po: Here’s an exclusive first look of my scene with @constancewu in the movie @crazyrichasians,” she captioned the photo.

In another post, Aquino revealed that she is playing an Asian Princess.

She said that by portraying the character, she is honoring her late mother and former Philippine President Corazon Aquino.

“This once in a lifetime blessing is for me, my way of honoring her memory.

If you ever do get to watch the movie, you’ll understand what I mean because those few sentences of dialogue I got to deliver are a reflection of what Cory Aquino symbolized and championed,” she added.

She also admitted that she misses her mother who was supportive in all her endorsements, television shows, and movies.

She urged her fans to pray for her since she needs to secure a medical clearance to travel abroad for the Hollywood premiere on August 7.

Aquino recently suffered an allergy attack while doing a campaign ad in Indonesia.

“Being 100 percent honest, I know myself enough that if I stay online, I’ll be pressuring myself about getting my medical clearance to fly to America for the @crazyrichasians Hollywood premiere,” she said in one of her Instagram posts.

For her, it will be a twist of fate and a test of faith on August 1 if she is allowed to travel outside the country.

Based on the best-selling novel by Kevin Kwan, “Crazy Rich Asians” is directed by Jon M. Chu and will hit cinemas on August 22.

The story is about Rachel (Wiiu) and her boyfriend Nick played by Henry Golding.

The trailer shows them going to Singapore to attend the wedding of Nick’s best friend. Rachel will meet Nick’s family but she is not aware that they belong to a popular and wealthy clan.

Other stars in the film are Michelle Yeoh, Awkwafina, Gemma Chan, and Ken Jeong.