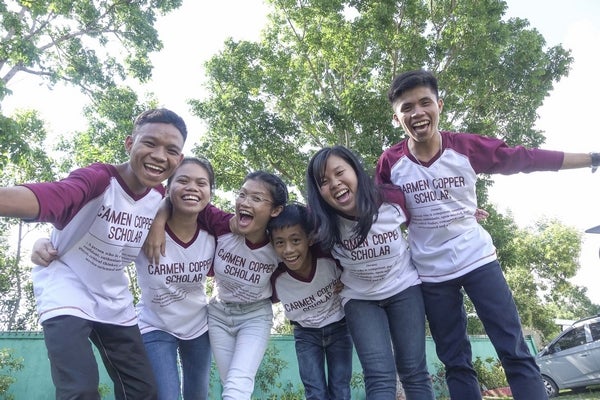 The scholars from grade 7 through college have reasons to be hopeful as they now possess the greatest weapon they need to break free from extreme poverty – quality education.

The Scholars Congress aims to develop leadership traits and practical life skills to the Carmen Copper scholars, as they face their challenges and opportunities during this critical season in their growing years.

“Carmen Copper is committed to actively raising the quality of life for each of you,” said Engr. Ignacio Alburo, Carmen Copper Assistant Vice President for Safety, Health, Environment, Community Relations and External Affairs. “We want all of you to achieve your full potential and reach your dreams so you will have a brighter future.”

Topics tackled during the congress included the crisis confronting millennials such as the pressures of social media, digital technology, peer pressure, emotional intelligence, leadership and finding ones identity and path.

Alburo stressed that it is by complementing academic education with leadership development workshops that Carmen Copper is able to help mold excellent, responsible and compassionate leaders in the youth of today.

“I learned a lot from all the speakers. I am inspired to improve myself more, become successful and in the future, build a safe community for all,” said Fatima Seguisabal, first year, Bachelor of Science in Criminology student.

Carmen Copper’s Scholarship Program is one of its efforts in providing inclusive and quality education for all, as part of its Social Development and Management Program (SDMP) commitment.

To date, the company has supported 305 scholars whose lives were changed for the better.

Five of them shared how:

Leon lost both of his parents one after the other when he was eight. He was then left to fend for himself. As an orphan, he had to find ways to survive.

He worked at a meat stall as a butcher, probably the youngest butcher in history.

Earning P300 a month, he endured this life for six years until the meat stall owner agreed to send him back to school to finish elementary. Despite everything he went through, he graduated the class valedictorian. He took other odd jobs to earn money to enrol in high school. “Maybe I’ve been a good enough boy because two special people came into my life and supported me through high school. I graduated again as the top of my class because I wanted to at least pay back their benevolence with excellence.”

When Leon learned about the Carmen Copper Scholarship Program, he did not waste the opportunity to apply. Being a Carmen Copper scholar, he said, set the path to a brighter future for him and most especially, gave him the sense of belonging.

After graduating elementary, Joan’s grandparents were adamant to not send her to high school because they believe she would end up like her mother who gave birth to her out of wedlock. “They said we are just poor and that elementary is as far as I can go just like my mother and her siblings. I cried and begged a hundred times. I tried to seek support from my friends and teachers. One of my teachers informed me about the Carmen Copper scholarship.”

She barely made it to the qualifying exam and when she passed and was admitted to the program, she brought the good news home. “I thought they will be happy, but they remained hesitant and even threatened to disown me if I pursue the matter. I was 12 years old, but for the first time I had to stand my ground and convince them that I am doing this not only for my own future, but for them as well.”

At a young age, Joan already believed that education is her ticket out of poverty. She is a Carmen Copper scholar from Grade 7 until now as a first year college taking Bachelor of Science in Civil Engineering.

She may be skinny and petite but Jonalyn has the weight of her whole family’s future on her shoulders.

Jonalyn was an excellent student writer. In fact, she championed a national essay writing contest where she got an offer for a scholarship grant when she was in Grade 6. But the scholarship would mean she had to be away from her family, especially, from her ailing mother. She had to decline this opportunity and found her way to Carmen Copper’s doorsteps just as she was on the verge of losing hope. Her father is a carpenter who almost cannot make ends meet as he had to take care of his wife suffering from a kidney disease.

“I remember it was very difficult at that time. My father had to buy expensive medicines for my mother. Then I learned about Carmen Copper’s scholarship and things started to get better,” she said.

A scholar since Grade 7, Joan is now in college and aspired to be a Chemical Engineer one day. Being a Carmen Copper scholar, she said, helped her develop her self-esteem, find her courage and become resilient in the face of adversities.

She is a proud daughter of farmers from Barangay Bagakay, a mountain village in Toledo City. Even though her parents cannot give her material things, they have always showered her with love and support. It was her parents who taught her the value of education.

“Since I was young, I always believed that as long as I can get quality education, I can go a long way in life,” she said. But with the meager income the family earns from farming, even proceeding to high school became almost impossible.

“That was when my parents learned about the Carmen Copper Scholarship Program and urged me to apply. The scholarship was a ray of sunshine for me and I knew then I was a step closer to becoming a Chemical Engineer one day,” Cherry Mae said.

She is now in Grade 11 studying diligently to maintain good grades.

Poverty forced both of Alex Sander’s parents to find jobs to raise their family of six. Like in many poor families, parents often needed multiple sources of income to get by. When Alex was five, his mother started working as a nanny taking care of other people’s children. For Alex, it was simply unfair.

As he matures though, he realized that his parents were forced to work, almost to death, just so they can feed their four children. His father works as a construction worker.

“Only after much later I realized that it is hard to find better jobs if you are just an elementary or high school graduate. I cannot blame my parents, but

I promised myself that to the best of my abilities, I will break this cycle.” Alex believed that education is the great equalizer.

Read Next
Finding a better use for container vans: Business spaces