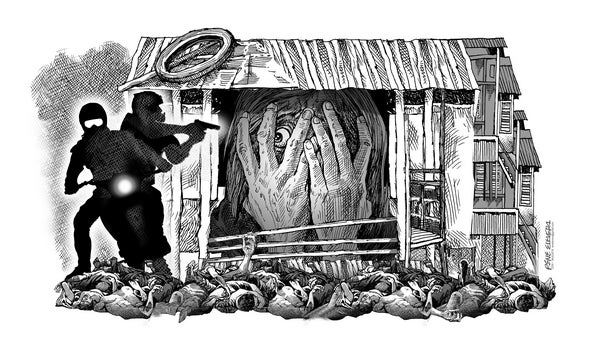 Senior Supt. Royina Garma, Cebu City police chief, should not dismiss outright the public’s concern about killings that remain unresolved either due to lack of witnesses, reluctance to probe even deeper or whatever reason they could think of.

“I am calling on those who witnessed crimes to please come forward and help us. Crimes thrive in places where people are afraid. We need the support of the community since the police could not just fabricate evidence,” she said.

But community assistance means earning their trust and how can one earn their support when there is widespread fear and anxiety among residents of masked vigilantes riding in motorcycles shooting down criminal suspects at any time of the day and them being caught in the crossfire?

In the case of Barangay Tejero councilman Jessielou Cadungog, which Garma and her superiors try to water down and turn it around with him as the perpetrator, suspicions persist that PO3 Eugene Calumba was doing more than just random surveillance at the time he was shot down by the local official’s bodyguard.

Speaking of support, that Cadungog episode cost the Cebu City police City Hall’s support in terms of fuel subsidies and operational maintenance budget no thanks to Garma’s challenge to the administration to prove its claim that some killers enjoy police protection.

It’s not the first time the city police lost some form of financial support from City Hall as Mayor Tomas Osmeña withdrew the cash reward for police for operations against illegal drug dealers.

Back then, the Department of Interior and Local Government (DILG) withdrew the the mayor’s supervisory authority over the police for this incident and while he eventually regained such authority, there’s no discounting the possibility that he may lose it again if he stands pat on his decision to cut down fuel subsidy and maintenance budget for the city’s police vehicles.

And when even the Cebu Archdiocese and the business community have recognized and questioned the mounting death toll in the police’s war against illegal drugs and criminality, police officials like Garma simply cannot ignore nor dismiss outright their concerns.

Garma claimed that whatever public anxiety there is over the killings is a matter of perception.

So following her line of reasoning, the 112 people killed in over six months, including the 92 gunned down by masked motorcycle riding assailants who remain at large and unpunished, is nothing to be concerned about so long as it doesn’t happen to you or anyone you know about — until it’s too late.

Read Next
ANOTHER LAW ENFORCER DEAD