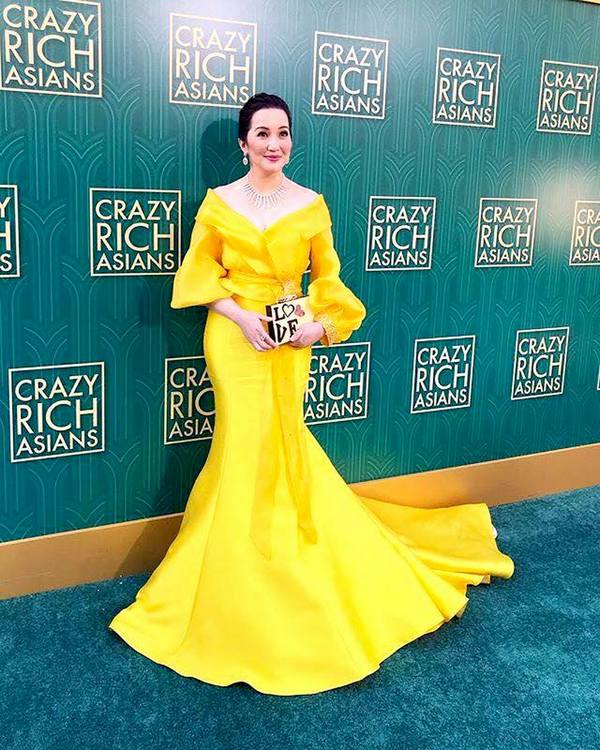 THE “QUEEN of All Media” Kris Aquino attended the Red Carpet Premiere of “Crazy Rich Asians” at the TCL Chinese Theatre in Hollywood, California last Tuesday.

“#Filipinoprideprepresent @krisaquino in Yellow Classic Modern Filipiniana by @michaelleyva_ at the world premiere of #CrazyRichAsians in #hollywood,” he captioned the photo.

Aquino had five outfit choices all designed by Leyva and Francis Libiran.

During the premiere, Aquino was greeted by Filipino fans outside the venue.

“This was the reason we made the effort to be here. It is my honor to proudly represent the Philippines. Maraming salamat po sa effort ninyo to show your love and support! #KaySarapMagingPilipino,” she captioned the video.

From the video, a fan was heard saying, “We love you!”

Another fan said, “Oh My God! You are so beautiful!”

Some expressed their support holding a yellow banner which reads, “Welcome Kris Aquino.

The Queen of All Media. Pride of the Philippines.”

Aquino approached and greeted her Filipino fans outside the venue. She was accompanied by son Bimby.

“Hi,” Aquino said as she shook hands with them.

Singaporean-American novelist Kevin Kwan, author of the satirical novel “Crazy Rich Asians,” said that Aquino’s character is a highlight in the movie.

Comedian Nico Santos, another Filipino who made it to the cast of “Crazy Rich Asians,” also attended the world premiere.

In the first video Santos, who was in the car with family, said, “We are on our way to the Crazy Rich Asians Premiere!”

The second video he uploaded shows him wearing a blue suit with a Philippine flag pin.

The Filipino comedian is also known for his character Mateo Liwanag in NBC’s “Superstore,” an American television series.