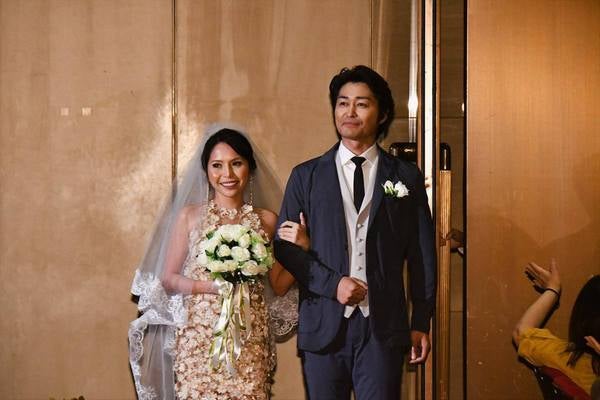 “I really studied the character. I observed and interviewed a couple of people weeks before the shoot. And days before I flew to Japan, nagkulong ako sa bahay for two days para pag-aralan talaga ang character,” she said. She auditioned for the role in May 2017.

Aside from Irene, the story also centers on a 42-year-old Japanese man named Shinodo Iwao, played by Ken Yasuda.

Directed by Keisuke Yoshida, the movie will be released in Toho Cinemas in Japan on September 14.

Aside from speaking Nihongo, Sitoy also delivered English and Filipino lines in the film.

“They gave me the script before the summer shoot. Luckily, most of my Nihongo lines were shot last February so I had time to memorize them,” she said.

She said that she also had a translator in Japan.

She also enrolled in basic

Nihongo class in Manila for two months after the summer shoot.

Although learning the language was difficult at first, she was able to adjust because she she stayed in Japan during the summer.

A proud Cebuana, Sitoy is a native of Cordova town.

She is the daughter of the late Board Member Arleigh Sitoy and the granddaughter of Presidential Adviser on Legislative Affairs Adelino Sitoy.

“Itoshi No Irene” is her second time to play a lead role. The first time was for the movie, “Soap Opera,” an entry to the Cinema One Originals 2014. Directed by Remton Zuasola, it also starred Cebuano actor Matt Daclan.

Sitoy was part of the cast of GMA’s 2017 TV series, “I Heart Davao” headlined by Tom Rodriguez and Carla Abellana.

She also appeared in Zig Dulay’s “Bagahe,” one of the entries to the Cinemalaya Film Festival 2017.

Sitoy is part of Brillante Mendoza’s series “Amo” which can be streamed via Netflix.

While filming in Japan, Sitoy got to observe her colleagues and was amazed at how punctual they were.

“Time is very important for them. They were also professional in the sense that they value their work. There was no unnecessary noise in the set. And they were fast in the shooting. Siguro ‘yung latest ng shoot ko there was 10 to 11 p.m. Minsan kasi here in the Philippines umaabot ng morning the next day,” she said.

Aside from speaking Nihongo, the cold weather was also a challenge.

“It was my first snow experience. And it was not just snow—mountains of snow,” she laughed.

She said the film will teach the viewers about kindness and forgiveness.

“Till the end, Irene never let the negativity swallow her. Among all the characters in the film, it was she who remained with a pure heart, no matter how flawed her character was from the start. Lahat naman kasi flawed characters pero siya lang ang deserve mag survive,” the Cebuana actress said.

The film will also highlight the resiliency of Filipinos.

Cebuana actress Dionne Monsanto and Ruby Ruiz also have a special participation in the movie.