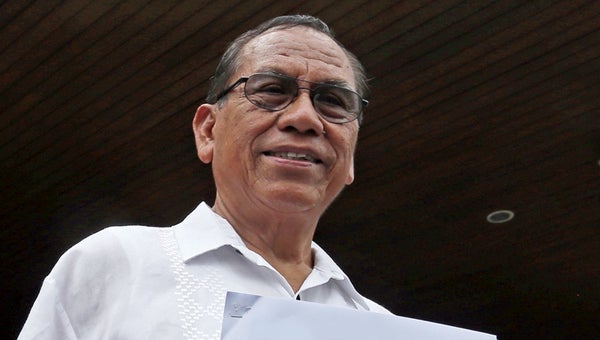 Former Talisay City Mayor and currently Councilor Socrates “Soc” Fernandez has been meted a three-month suspension for his alleged role in the escape of his adopted son, Joavan Fernandez, from jail in 2013.

According to the Department of Interior and Local Government Cebu province (DILG-Cebu), they had served the order suspending the former mayor and now Councilor Fernandez for three months last July 31.

According to the DILG-Cebu, it had served the suspension order after the Office of the Visayas Ombudsman submitted to the DILG-Cebu the decision finding Councilor Fernandez guilty of simple neglect of duty.

The Ombudsman found Fernandez guilty of the offense for allegedly conniving in the escape of Joavan Fernandez from the Talisay City detention cell and for allowing his adopted son to use a city government-owned vehicle to escape the detention cell on May 8, 2013.

The decision was recommended for approval by Deputy Visayas Ombudsman Paul Elmer Clemente on Feb. 5, 2018 and was approved by then Ombudsman Conchita Carpio-Morales on April 23, 2018. Carpio-Morales has recently retired as the Ombudsman.

But Councilor Fernandez said in a phone interview on Monday that he had not yet received the suspension order and would continue to serve as the city’s councilor.

Councilor Fernandez also questioned the timing of the decision of the anti-graft body, which was decided five years after the incident and when he was no longer the city mayor.

“We do not know the reason, but that was the time when I was the mayor in Talisay,” he told Cebu Daily News in a phone interview.

Councilor Fernandez said that his lawyer had already filed a motion for reconsideration at the Office of the Visayas Ombudsman last Aug. 17 to contest the decision to suspend him.

He said that he filed a motion for reconsideration even without receiving the suspension order yet.

He said that he was given advice to file a motion for reconsideration despite not having received the suspension order.

“He is actually under suspension now. We served it last July 31,” DILG Provincial Director Jerome Gonzales said in a text message.

According to the Ombudsman, the decision stemmed from a complaint against then Mayor Socrates Fernandez for misconduct, conduct prejudicial to the best interest of the service, oppression, abuse of authority filed by the Ombudsman’s Field Investigation Office (FIO).

The complaint stated that at the time of Joavan’s escape, his wife Mayet visited him in the city jail together with their four children.

Joavan reportedly asked the permission of PO2 Leandro Azarcon, the jail guard at that time, to go out from his cell to hug his children.

Azarcon granted the request of Joavan.

When outside his cell in the jail facility, Mayet allegedly gave his mobile phone to Azarcon as Joavan’s father, Fernandez, reportedly wanted to talk to the jail officer.

It was then that Joavan allegedly took the chance to hurriedly run outside the jail facility into the city government-owned vehicle, a Mitsubishi Adventure, which was parked outside.

“Respondent is expected to ensure that systems or processes are in place to prevent the unathorized use of vehicles under his supervision. But Joavan eased himself inside the Mitsubishi Adventure without difficulty and drove it away to carry out his escape,” the decision stated.

“This showed respondent’s carelessness in the administration of the vehicle issued to his office,” it added.

Joavan Fernandez has since been rearrested and has been serving a 40-year jail term.