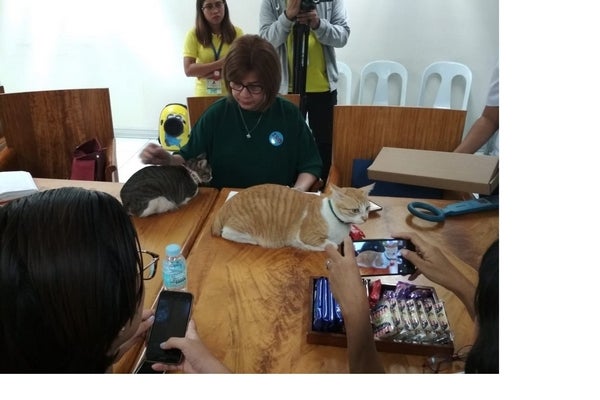 Cats are the most neglected and injured pet of all the animals, according to Island Rescue Organization president Dr. Annalyn Aizpuru.

Dr. Aizpuru said that most of the cats, especially the stray ones, usually get injured because of physical abuse from their owners, while others get hit by cars in the streets.

One of these cats is a former stray cat named Mahusay, who was rescued by IRO outside a supermarket in Cebu City after he was found lying down in the ground, badly injured. Several of his limbs were broken, and his right hind leg was amputated.

According to Dr. Aizpuru during the launching of the cat microchipping system on Thursday, the cat’s leg was already filled with bacteria, and only had bones left.

The IRO also takes care of another cat named Kibol, an adopted cat from the Cebu City pound.

Kibol also suffered a disability as he has a shorter tail that seems to have been cut.

These two cats are called PWDs or pusas with disabilities and are considered by Dr. Aizpuru the ambassadors of abused cats.

The IRO will conduct the Pusang Pinoy Day on August 27 at Robinsons Galleria to educate cat owners on proper care and grooming for the animals.

Meanwhile, Cebu City Veterinarian Dr. Alice Utlang explained that the cat microchipping system involves a chip that will be inserted on the shoulderblade of the cat, and the owner will give the general information such as the location and contact number to the Department of Veterinary Medicine and Fisheries.

The information is necessary because the owner can easily be contacted if the cat gets lost. This information can be seen with the use of a scanner or a cell phone.

“Ang purpose sa microchip kay makahibaw gyud ta kun kinsa gyud ang tag-iya (The purpose of the microchip is to find out who the owner of the cat is),” said Dr. Utlang.

Dr. Utlang also clarified that the microchip is not dangerous, and has already been used by other countries.

According to Dr. Utlang, the chips implant can only be performed by a veterinarian. /USJ-R Intern Gerard Vincent Francisco

Read Next
A perfect stopover for lechon