Mayor: Projects done, but contractors not billed yet 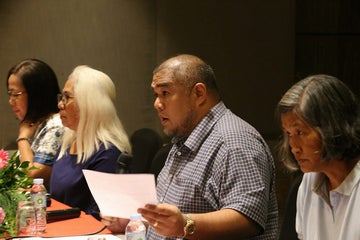 Projects in Bantayan town in northern Cebu were implemented but the payment of the contractors of the projects, which would be sourced from the town’s development fund, had not been paid yet.

Ewaniza Abello, municipal accountant of Bantayan town in northern Cebu, said this as a clarification on the findings of the Commission on Audit, claiming that the town had unutilized at least P49.6 million of the town’s P60 million development fund.

“The report of COA was based on payment sa disbursement which was different. Utilization is different from implementation. Naka-implement mi sa project pero wala lang mi kabayad (We have implemented projects but we have not yet utilized the money),” Abella said in a press briefing on Friday at the Bai Hotel, which was attended also by Bantayan Mayor Ian Christopher Escario.

She said that the town had completed priority projects which included the construction of motor pool at the municipal compound, the drainage in Barangay Ticad, supply and delivery of market stalls among others.

She also cited the P7.8 million ongoing rehabilitation of the municipal wharf.

“In totality, there is no deprivation because we have implemented the projects as a plan in our Annual Investment Plan,” she said.

Mayor Escario, for his part, also clarified that the fund was there and that they were only waiting for the contractors to ask for their payment of the projects they were undertaking for the town government.

“Ang kwarta dia pa nato pero dili pa ta kabayad kay dili man sila (contractors) mo-bill (We have the money, but we cannot release it yet until the contractors will bill us for the projects),” said Escario as a clarification to the findings of the COA 2017 report which stated that the town had failed to utilize the about 83 percent of the total appropriating fund for the implementation of the town’s priority projects.

But Escario also emphasized that the audit report also included the past administration of former Mayor Arthur Despi in 2017.

Escario assumed as the duly elected town mayor of Bantayan in May 12, 2017 after the Commission on Elections (Comelec) disqualified then Mayor Arthur Despi due to an alleged “material misrepresentation” in his Certificate of Candidacy (COC).

Based on the municipal engineer’s record, there were no projects implemented for the months of January to July 2017.

Escario said they started bidding for projects in July 2017.

Despi, on the other hand, said at that time there were programs in place and ready for implementation.

“I was Mayor of Bantayan for 4 and a half months in 2017 before stepping down. At the time, several programs were in place, ongoing or ready for execution. On the day that Mr. Escario took oath, May 12, I was preparing for a climate mitigation project that I was able to submit in Manila,” Despi said in an e-mail sent to Cebu Daily News.

With the change of leadership, Despi said that the incumbent mayor allegedly replaced key officers, department heads and municipal workers which had caused the delay of the implementation of projects.

“I’m not surprised that several programs and projects lined up for the rest of the year were not done,” Despi said.

But Escario denied Despi’s allegations about replacing some key officers, department heads and municipal workers upon his assumption.

As for the allegations that he terminated at least 380 job order (JO) workers, Escario said JOs are project-based and their contracts have already expired.

“Kon nahinay ang projects pag-terminate nako, nganong nipaspas man after June? Ang walay movement ang January to May (If the projects slowed down after I terminated the JO workers, why then were project’s quickly implemented after June),” said Escario.

He also cited Bantayan’ being recognized for its Good Financial Housekeeping in 2017 from the Department of Interior and Local Government (DILG).

Bantayan Budget Officer Doris Espina, for her part, also said that the proposed projects during the time of Despi had continued except for his proposed road opening from Barangay Mojon to Barangay Kabangbang in Bantayan.

She said it lacked the necessary documents, such as the deed of donation of private properties and road right of way for the planned road project to materialize.

TAGS: billed, BUT, contractors, done, mayor, not, Projects, yet