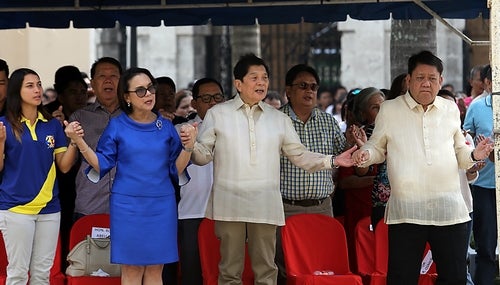 Cebu City Mayor Tomas Osmeña (right) leads the city’s Independence Day
celebration in this June 12, 2018 photo. On Friday (Aug. 31), the mayor’s allies have shown their support for the mayor, who was criticized by President Rodrigo Duterte during his speech on Mandaue City’s Charter Day celebration on Aug. 30.

After the scathing remarks of President Rodrigo Duterte against Cebu City Mayor Tomas Osmeña, the latter’s allies took tosocial media on Friday to express their support for the beleaguered mayor.

They were accompanied with captions which stated that they will not stop supporting the local chief executive.

Among those who changed their Facebook profile pictures was Garry Lao, executive director of the Cebu City Office on Substance Abuse Prevention (COSAP).

In a phone interview with Cebu Daily News, Lao said the gesture was his way of expressing his “unwavering support” to Osmeña despite the harsh comments released by President Duterte during the latter’s sixth visit to Cebu on Thursday.

“It was a personal thing. There were no instructions coming from a specific person. We just expressed our support personally. It all started on Thursday evening shortly after the President made his comments in his speech,” said Lao.

“Before this happened, I am for Mayor Osmeña. Because I observed what he did for the Cebuanos, and we believe he has done a lot of things. He may not be a perfect mayor, he may had mistakes but he truly prioritized the needs of the Cebuanos,” he added.

Even if he did not change his Facebook profile picture, Councilor Sisinio Andales, Osmeña’s political ally under the Bando Osmeña Pundok Kauswagan (BOPK), urged Cebuanos to rally behind the mayor.

“ (I) personally and fully support the leadership of a true-blooded Cebuano Mayor Tommy Osmeña despite threat of Presidential slap and insults. (I am) requesting Cebuanos to rally behind the mayor,” Andales said in a post on his official Facebook page.

President Duterte was the guest speaker for the 49th Charter Day of Mandaue City last Thursday when, shortly before he concluded his hour-long speech, he lashed out at Osmeña for apparently accusing him as a drug protector.

Mr. Duterte also ascribed the mayor as having “hubris,” a personality quality of extreme and foolish pride and exaggerated self-confidence.

This was the first time the President openly lashed out at Osmeña, whom he had just acknowledged in an earlier speech 10 days before, at the League of the Municipalities of the Philippines (LMP) Visayan conference in Cebu City, for supporting his presidential bid in 2016.

Osmeña, in response, posted on his official Facebook page that he respected the President’s comments, and vowed not to get affected by the harsh comments in doing his responsibility as mayor.

At the same time, he accused his arch-enemies, former Cebu City Mayor Michael Rama and Presidential Assistant for the Visayas Michael Lloyd Dino, for allegedly provoking the President.

He also dragged the Police Regional Office-7 (PRO-7), with whom he has been at odds with recently due to the spate of unsolved killings in the city.
“As a lawyer, I am sure that he knows that there are two sides to any story, and not just what Dino, Rama, and PRO-7 are telling him,” Osmeña said.
For his part, Rama denied the allegations hurled against him by Osmeña.

“I even had a hard time getting an audience with the President to clear my name (from his narcolist), how much more kung magsolsol ko niya (if I provoke him),” said Rama, who recently had been spotted meeting President Duterte in several private and public occasions.

The Office of the Presidential Assistant for the Visayas (OPAV) and PRO-7, refused to comment on Osmeña’s allegations.

PRO-7 spokesperson, Supt. Reyman Tolentin, told reporters in a press conference yesterday that the mayor’s statements were nothing but an expression of his own belief. He added that only the Philippine National Police (PNP) in Camp Crame can give the President any information.

“That could be his (Osmeña’s) analysis and views on why the President was able to release such statements,” said Tolentin.

Meanwhile, Cebu South District Representative Rodrigo “Bebot” Abellanosa, who is also allied with Osmeña under BOPK, said he hoped the issues between the mayor and President Duterte could be clarified.

“We hope that very soon, for the good of Cebu City, Mayor Tommy can make the necessary clarifications to the President, and the ones who are really fabricating the lies can be unmasked,” Abellanosa told CDN in a separate interview.

Abellanosa also said that Mr. Duterte’s remarks against Osmeña will not have any significant impact on Cebu City.

“Though it was made in his trademark manner of derisive comments, the President apparently was saying he wants to take up with Mayor Tommy in an arranged meeting the issues presumably fed to him. Take out all the punchlines, that is basically the President’s message to Mayor Osmeña,” he added.

Read Next
Pagasa warns of floods, landslides over weekend