Perceptions, politics and the future 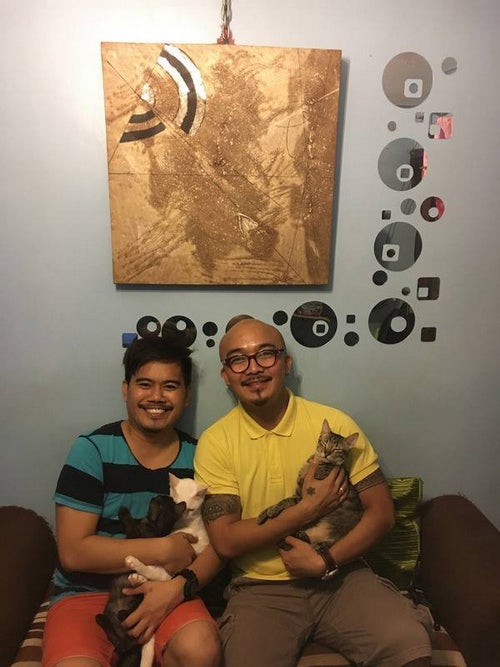 Newlyweds Michael Cano and Jay Lugo live together in a rented house in upland Cebu City together with their three felines – Lily, Moe and Toothless.
contributed photo)

A recent Pew Research Center study showed that the Philippines ranked 10th among 17 countries in the world with a high level of public acceptance for homosexuals.

But while this may be so, a March 2018 Social Weather Stations (SWS) survey also showed that opposition to the civil union of same-sex couples was dominant in all areas and religions.

According to the SWS survey, 61 percent of 1,200 respondents rejected legalizing same-sex marriage; while 16 percent said that they were still “undecided” on the matter.

Only 22 percent said that they would support it, the SWS survey showed.

But for LGBTQI (lesbian, gay, bisexual, transgender, queer or questioning and intersex) supporter, Carlos Conde, a researcher for the Asia division of Human Rights Watch, “the rights of an individual, with the life that he wants, trumps whatever privilege the public has in rejecting same-sex partnerships.”

While Conde believed that a stigma still existed against being gay in the Philippines, and LGBTQI individuals were still being discriminated, things were far better off here compared to “homophobic countries” such as Russia.

For her part, Magdalena Robinson, officer in charge of Cebu City’s Anti-Discrimination Commission, cited the need to open more public discussions on why same-sex marriage legislation related to equal protection.

“It’s high time to widen the discussion with the public on the reason why marriage equality is important in the application of equal protection in the laws,” Robinson said.

Kina Escano, a lesbian who lived with her female partner and the latter’s child, was grateful for allies who continued to advocate for the passage of same-sex marriage legislation.

“I am grateful for the genuine support given by our straight allies. They get it. And to see our ally network continually growing to defend diversity and reduce inequality is deeply moving,” said Kina.

According to Conde, in order to realize the right of all genders to marry, the exercise of political will by the country’s leaders was essential.
Conde added that when the Catholic Church tries to influence government, the issue on LGBTQI rights gets muddled.

He also cited that the absence of a national Anti-Discrimination Bill has, instead, prompted local government units to legislate laws within their territorial jurisdictions.

In Cebu province for example, the cities of Cebu and Mandaue passed their own measures to ensure the protection of LGBTQIs in the exercise of basic rights such as employment, admission in schools, and access to public programs and services.

“As a result of the failure of the national leadership to tackle the Anti-Discrimination Bill, we are seeing a lot and a lot more cities which are passing anti-discrimination ordinances,” Conde said.

While the Supreme Court had yet to rule on a petition allowing same-sex marriage in the country, the Civil Partnership Bill also remained pending in Congress.

“The future of the (Civil Partnership) bill rests in the political leadership in the executive and legislative branch. One, to set it as a priority, and the legislative to understand the rights that are covered,” Robinson said.

With the recent change of leadership in both houses of Congress, Conde said that they might have another
hurdle to overcome to pass legislation.

According to Conde, Arroyo and Sotto, who hold conservative views, had both demonstrated their willingness and capacity to block progressive legislations in the past.

“I think the rise of Sotto and Arroyo will be a stumbling block for these measures meant to address discrimination against LGBT,” Conde said.
Lawyer Jesus Nicardo Falcis III, who earlier filed the SC petition pushing for the right of same-sex couples to marry,
also shared Conde’s view.

“Arroyo and Sotto are known conservatives and they are similar to Pacquiao (Sen. Manny Pacquiao). They legislate on the basis of their personal religious beliefs,” Falcis said.

After their symbolic union at a private ceremony in Balamban town, Cebu, last June, gay couple Michael and Jay Cano Lugo are now looking to buy a new home.

Jay, who takes charge of their house affairs, had also been tasked to look for business opportunties that the couple could start together.
Once financially stable, Michael and Jay planned to adopt a child.

“It is about time to recognize same sex marriage in the Philippines. We don’t have rights to each other,” said Michael.
Gender advocate, Arcy Yuson, Michael’s close friend who officiated the symbolic union, called on the public, particularly LGBTQIs, to study the

history of the marriage equality movement, educate peers, engage the government and join in mobilizing communities while measures are pending approval at the SC and Congress.

“Notwithstanding, our conservative Catholic culture, hetero-normative status quo and our macho oriented politics; we take lessons from the LGBT movements of other countries,” Yuson said.

If the Philippines would still not recognize same-sex unions next year, Michael and Jay said that they would go to Taiwan where the country’s constitutional court, in 2017, held that the definition of marriage limiting it to a man and a woman was unconstitutional.

There, Michael and Jay expect to take each other as partners in accordance with the laws of Taiwan.

But the couple’s planned marriage in Taiwan may not be binding in the Philippines.

Falcis, who faced SC justices during oral arguments on his same-sex marriage petition last June, believed that the High Court might reach its decision as soon as a few months from now, or as long as a few more years.

Meanwhile, Falcis said that more Filipinos needed to understand that marriage equality was not a violation of religious freedom.

TAGS: and, future, Perceptions, politics, THE