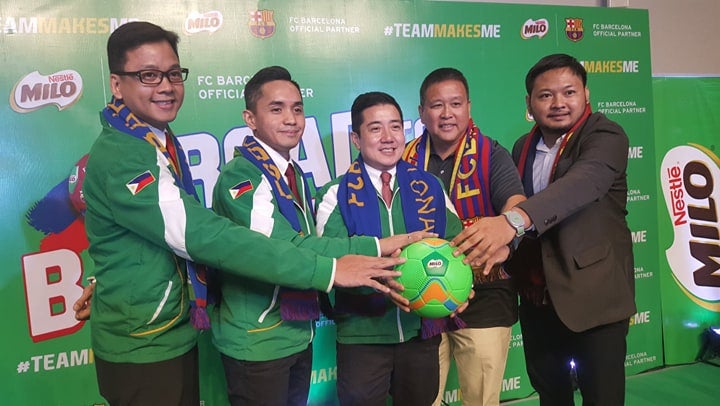 SOME students of the Sisters of Mary School Boystown in Tungkop, Minglanilla, and the City Central School of Barangay Kalubihan in Cebu City will get the chance of a lifetime as they were chosen as the beneficiaries of the outreach program of this year’s Milo-FCB Road to Barcelona.

This was announced by Milo Philippines Consumer Marketing Manager Robbie de Vera during the launching of the Milo-FCB Road to Barcelona yesterday at the Milo Stadium of Kidzania Manila in Bonifacio Global City in Taguig.

The 80 students from Boystown and City Central will undergo a training session on Sept. 10 at the Cebu City Sports Center (CCSC).

There will also be a separate camp dubbed the Milo-FCB Philippine Training Camp for the 160 selected boys and girls aged 10 to 12 years old coming from all over the Philippines on Sept. 8 and 9 at the same venue.

From the 160, seven will be chosen to go to Barcelona, Spain and join the Milo-FCB Training Camp at the Camp Nou, the home of FC Barcelona, which is the club of soccer stars Leo Messi, Gerard Pique and Samuel Umtiti. Of the seven, one will get to go on an all-expense paid trip courtesy of Milo.

This will be the second year that the partnership between Milo and FC Barcelona will be sending lucky trainees to Barcelona, Spain, for nine days and join their peers from Jamaica, Singapore, Thailand and Australia.

Although only seven will be chosen for the ultimate experience, the Milo-FCB Training Camp in the Philippines will still be a unique experience for the 240 kids since the two-day camp at the CCSC will be handled by coaches from the FCB Escola Youth Football Academy from Barcelona, Spain — Jordi Aguilar Roca and Albert Batalla Fernandez, both UEFA A licensed coach.

The same coaches will handle the outreach training on Sept. 10 along with former Philippine Azkals Anton del Rosario and Philippine Malditas’ Amanda Fernandez.

This year, the Milo-FCB Training Camp in the Philippines will be held in Cebu in cooperation with the Cebu Football Association.

Read Next
UC table paddlers to vie in Nationals