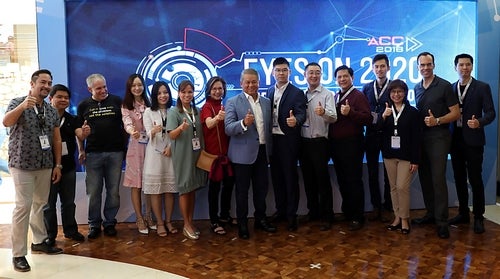 Players in the telecommunications industry are setting their sights on the next two years which they see as critical for the industry.

A development that Katrina Luna-Abelarde, PLDT global president, has observed in the industry today.

“The next couple of years are critical for the industry’s survival and growth.

What we have right now is an elevated sense of urgency.

We feel that the turn of the new decade will be a defining moment for the technology and infrastructure industry at large,” said Abelarde during the yesterday’s opening of the 2018 edition of the Asian Carriers Conference (ACC) at the Shangri-La’s Mactan Resort in Cebu.

Abelarde, who is also the ACC 2018 chairperson, said that among the trends they had seen in the sector had been the need for telcos to collaborate more with the technology players.

She said that telcos had been keen on taking on challenges regarding cyber security, fintech, artificial intelligence, the “internet of things,” and building the foundation for smart cities, among others.

Industry’s challenges that will be tackled in this year’s ACC, which carries the theme “Eyes on 2020: Turning Vision into Action.”

PLDT and Smart Chief Revenue Officer Eric Alberto pointed out how conferences like the ACC had played a vital role in the fast-paced evolution of the business and technology landscapes.

“Our current reality is defined by disruption and innovation, imposing a need for consumers and enterprises to adapt. All of us here in ACC 2018 share a resolve and clarity of vision to carry the industry through continuous Digital Transformation,” Alberto said.

Both Abelarde and Alberto attended the opening ceremony of the ACC 2018 on Tuesday morning.

Abelarde said these delegates come from areas like Asia, Europe, the United States, Middle East, and even from Africa which, she said, have started becoming more progressive.

“At the end of the day, the purpose of this is to improve consumer experience.

For the mid and longer term, it is to collectively design, create, and deliver solutions that improve the lives of Filipinos and improve economies,” she said.

The ACC 2018 is hosted by the PLDT Group. They are expecting over 1,000 telecoms professionals from 200 companies operating in more than 60 countries to participate in the workshops, talks, and networking opportunities during the concerns.

Delegates from global companies like Huawei, Ciena, Wuhan Fiberhome, PCCW Global, Orange, Softbank, and SBTS, among others, are expected to attend the ACC 2018.

Among those who attended yesterday’s opening day were officials from the Mandaue Chamber of Commerce and Industry (MCCI).

Steven Yu, MCCI vice president for external affairs, said they were hoping to learn more about what businesses should watch out for in the industry.

“We expect to know the future trends and directions of the telco industry and how it will affect the business community,” Yu said.

He said that telecommunications had been the underlying core of the future business ecosystems, which had made it important for businesses to be aware of trends and directions.

Uri Levine, Waze co-founder and serial startup entrepreneur, was among the speakers of the first day of the four-day conference which will close on Sept. 7.

Levine discussed disruption and entrepreneurship enable revolutions in business and technology, drawing from the ups and downs of his years in the startup industry.

Levine founded Waze, the world’s largest community-based driving traffic and navigation app which has more than 250 million users worldwide. It was later acquired by Google in 2013 for more than $1.1 billion.

Read Next
Telco to strengthen foothold in Cebu market