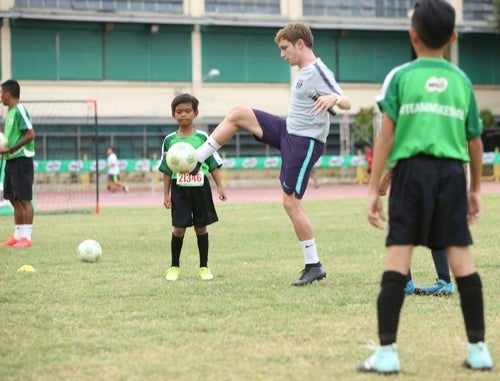 The young Filipino footballers did not disappoint and even wowed the visiting FCB Escola Youth Football Academy from Barcelona, Spain, in yesterday’s start of the Philippine training camp of the Milo-FCB Road to Barcelona at the Cebu City Sports Center.

“I’m very surprised for their attitude and for the technical level of all these players,” said Albert Batalla Fernandez, one of the FCB Escola Youth Football Academy coaches from Barcelona, Spain, handling the camp.

This was echoed by his fellow coach, Jordi Aguilar Roca, who also appreciated the performance of the 160 selected players.

“We think that Philippine kids are so good, so nice and with a good discipline and it’s so easy to work with them,” Roca said.

More than the skills, the camp will give more weight on the attitude of the participants.

The values will also carry more weight in the selection of the seven who will be flown to Barcelona, Spain for a nine-day training camp at Camp Nou, the home of FC Barcelona where the likes of football stars Leo Messi, Gerard Pique and Samuel Umtiti train and play.

According to Milo Philippines Consumer Marketing Manager Robbie de Vera, the seven will be chosen based on a split of values (70 percent) and skills (30 percent).

He explained that the Milo-FCB partnership aims to develop not only the footballing skills of the youngsters but to also imbue them with the values of humility, effort, ambition, respect and teamwork, or the HEART component that both Milo and FCB espouse.

Values that are not only useful in sports but also in the daily lives of the kids.

The camp will continue today with more value laden drills.

A short closing ceremony will be held right after the camp with each participant given a certificate and a souvenir picture.

Read Next
CESAFI VOLLEY ON