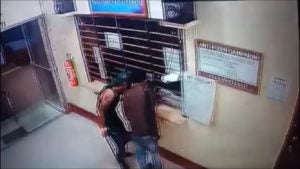 Police authorities in Moalboal town, Cebu are now conducting a hot pursuit operation to arrest the suspects responsible for the robbery incident inside the Cebu Technological University (CTU)- Moalboal Campus at past 2.a. on Sunday (September 9).

It was the accounting officer-in-charge who discovered the incident.

Police investigators found that the suspect were able to break the money vault, and stole cash with a total amount of P464,330.

The police are now looking at the closed circuit television (CCTV) camera footage which captured the robbery incident to identify the suspects.