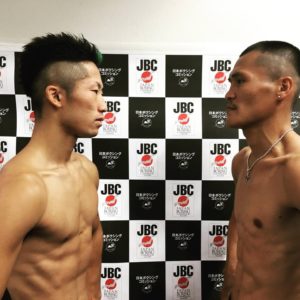 Inoue (left) and Yap face off during the weigh-in event in Japan.
photo from Facbook page of Mark John Yap

This will be the biggest fight in the career of the 29-year-old Cagayan de Oro City native, who is now based in Osaka, Japan, and fighting under the Muto Boxing Gym, as he inches closer to a crack at a world title.

The other world title eliminator features Thai Petch Sor Chitpattana (47-0-0), who is the number two in the WBC world bantamweight rankings, and the current number one contender Nordine Ouabaali of France (14-0-0). There is no final schedule when both will face off.

“I can win the fight if I think positively,” said Yap. “I draw my strength from God. Through him (God) there is no impossible that is why I will give up everything to him and let him do the rest.”

Yesterday, Yap and Inuoe both made weight with the Filipino tipping the scales at 117.9 pounds and the Japanese at 117.8 pounds.

Yap last fought in the Philippines in 2012 under ALA Boxing Gym before going to Japan in search for greener pastures. He slowly built a name in the Japanese boxing scene by beating several Japanese prospects and has not been defeated since 2015.

“I can take his punches and can fight against him toe-to-toe. But that does not mean I underestimate him. I will do my best for this fight,” added Yap.

Read Next
The Candidates: Sogod and Santa Fe