THE PREDATOR MORE LETHAL AND DEADLY 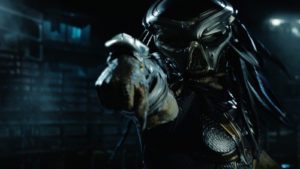 HOLD on to your hats and glasses ladies and gentlemen as “The Predator” has arrived!

And boy howdy … is he one upset fellow.

Taking place somewhere in the heartland of America’s Midwest, “The Predator” lands on Earth courtesy of writer/director Shane Black (“Iron Man 3”) who played Hawkins, a solider of fortune in the first “Predator” movie in 1987 … with Arnold “Dutch” Schwarzenegger taking on the solo, crab-faced monster in the jungles of South America.

Today’s “Predator” is even more lethal and deadly than the original. Just don’t expect “Romeo and Juliet” in the 107-minute running time of “The Predator.” 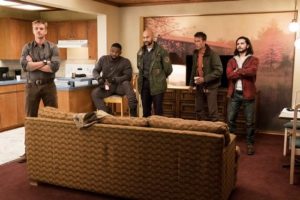 The actors all have “potty” mouths and the death scenes are particularly gruesome.

But, oh so much fun!

The franchise went dark until 2010 when director Robert Rodriguez’s “Predators” took moviegoers (and its eventual meat sack victims) to a jungle planet far far away.

Let us not forget the forgettable crossover films: 2004’s “Alien vs. Predator” and “Aliens vs. Predator: Requiem” in 2007.

According to the writer Black—along with fellow scribe Fred Decker—the Predators have been around for a very long time and, of course, the US government knows all about them and have recovered varied helmets and devices the Predators wear to survive in Earth’s nitrogen prevalent atmosphere.

He finds the remains of one of the alien hunters before making first contact with the critters; a battle ensures and McKenna, running for his life, grabs some of the remaining Predator equipment on his way to freedom.

Then he gets the bright idea of mailing—yes MAILING—the artifacts back to his estranged son Rory (Jacob Tremblay). 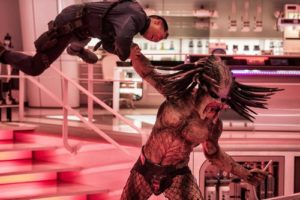 The youngster accidentally activates a homing beacon and presto chango, another nearby Predator spaceship plunges into Earth’s atmosphere with its occupants gunning for a fight!

Upon arriving back in the USA, McKenna is arrested by the military police who toss him into a hospital cell and start a lengthy interrogation.

Of course the local head shrinker/psychologist (Duncan Fraser) doesn’t believe McKenna’s fantastic tale of blood thirsty alien hunters—along with their pet attack “dogs”—and eventually the Feds chuck him into an awaiting bus with a bunch of other medically certified, PTSD crazy US Army misfits, who become the central focus of this film.

The camaraderie between these woebegotten American Special Forces soldiers starts off pretty rough and of course, none of these losers believes McKenna’s story either.

That is until the Predators start showing up and skinning humans.

If you are not a fan of this alien hunter series, nor seen any of the above named connecting films, know that these Predators are sports hunters who live for the thrill of the hunt, can “see” in various spectrums of light, turn invisible and have laser cannons attached to their shoulders.

Eventually McKenna and what is left of his new US Marines buddies, through a series of missteps, connect with Casey Bracket (Oliva Munn), one of
Rory’s High School teachers who is dragged into one US Government’s “super-secret” laboratories where all of the previously mentioned artifacts from the first two “Predator” films have been relocated.

The only thing missing for these wayward Americans is a live Predator “lab rat” for them to dissect, which is conveniently dropped into their lap.

To their everlasting regret.

Enter the 10-foot tall “Super Predator” in the film’s third and final reel who actually kills his own alien compatriot before turning his attention to the
hapless humans.

This is when all Hades breaks loose. 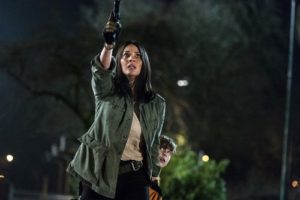 I loved the premise of the Predators walking around Middle America, just as in “Aliens vs. Predator: Requiem” back in 2007… this time with the Predator attack hounds (that we first saw in Rodriguez’s “Predators” film) as well as the varied connections and mentions to the first two Predator films.

But the crossover with “acid for blood” Aliens is barely shown … if at all.

In the dark of the theater, I actually had to squint to see any references to them.

Of course, the US government agents are really dopey and immediately become trophies for the Predators who slice and dice them up.

Just for the fun of it.

Once again we see stupid people doing stupid things like dropping their weapons and turning to run, thinking they can outrace an eight foot tall,
invisible alien hunter who uses the tops of trees and rooftops of tall buildings to get around. Jake Busey (Gary Busey’s son) is also part of this film with a vague reference to his father’s character, Keys from “Predator 2” but is utterly wasted.

I recommend this film to any action lover, even though the original “Predator” was the best in the franchise.

More than worth the price of admission.