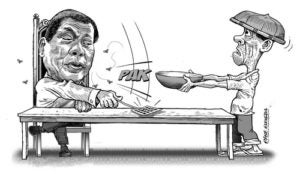 Somewhere in the middle of his overly long harangue against Sen. Antonio Trillanes IV, President Rodrigo Duterte found time to address the country’s worsening economy by saying he will meet with his finance officials to address them.

He could now add the expected costs of devastation wrought by super typhoon Ompong (international name Mangkhut) to the reported plans by Japanese firms to pull out of economic zones in Cebu and other parts of the country in his plate to marinate and find solutions for.

We hope to God he doesn’t blame any damages and loss of lives caused by super typhoon Ompong to his political rivals.

That would not only be the height of absurdity but outright loss of contact with reality on the President’s part — much like the judge who cited super typhoon Yolanda for contempt for causing the shutdown of the courts.

As it is, the President is more preoccupied with shutting down all opposition to his administration than addressing the country’s problems which he blames entirely on his critics and not on his officials who practically had a free hand dictating their will on the country’s economic life.

When told how the second version of his tax bill would affect investors — now renamed the Trabaho bill to make it more respectable to the public — the President had nothing to show other than his rationale that the revenue generated will result in building more infrastructure and improving the overall quality of life for every Filipino.

The President’s economic challenges somehow mirror those faced by his US counterpart President Donald Trump, whose insistence on imposing tariffs to China comes with the caveat that he expects it to force US companies to relocate back to the US so they can generate more employment and more taxes to the federal government.

But as explained in a survey done by the Japanese Chamber of Commerce and Industry on Japanese companies doing business in Cebu, about 27 percent may consider withdrawing their investments if the tax incentives offered to them are either reduced or withdrawn altogether.

And 85 percent of them will continue doing business if the tax incentives are retained.

It doesn’t help that other countries such as China are becoming an attractive investment destination due to their low labor cost, an incentive that US and other companies are unwilling to let go despite Trump’s tariffs.

The combined effects caused by these and other economic problems would weigh heavily on the President but that’s what he signed up for, and his tunnel vision caused by his obsession over the drug war is hurting and costing Filipinos dearly right where they are most vulnerable — their pockets.