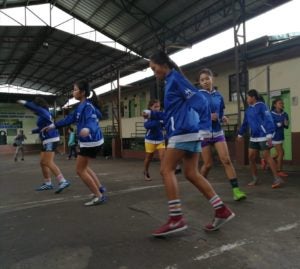 Members of the Cebu Province futsal team doing their warm up routine at the Doña Josefa Cariño Elementary School as the Batang Pinoy National Finals kicks off today in various venues around Baguio City. |
Glendale Rosal

Baguio City — After enduring the wrath of Typhoon Ompong that battered northern Luzon over the weekend, young Cebuano athletes now face a new set of challenges as the Philippine Sports Commission (PSC) Batang Pinoy National Finals 2018 officially kicks off today in various venues around the “City of Pines.”

For some of the Cebuano athletes competing here, the temperature is a concern as they prepare to take part in this multisporting meet in this city which is around a thousand kilometers from Cebu City.

Baguio City’s temperature was at 18 degrees Celsius yesterday, and the cool climate isn’t something that the athletes are really used to.

“When we were doing our regular routine, a lot of my karatedo players complained that they had leg cramps that’s why I asked for potassium and hydration aide from our delegation heads, which were distributed right away. We are not used to this kind of climate, I hope we can adjust in time for our competition,” said Aloba Sr.

Cebu Province, a delegation of around 170, are safely billeted at the Doña Josefa Cariño Elementary School just at the back of Baguio City Hall when Typhoon Ompong hit this city last Friday evening and the entire Saturday.

The entire delegation, which includes athletes from Mandaue City and Lapu-Lapu City, was in Baguio since Thursday, a day before Typhoon Ompong made landfall in northern Luzon.

Mark Allan Cantal, one of the athletic coach of Sisters of Mary School (SMS) Boystown said that his tracksters were also having difficulty in breathing because of the very cold air of Baguio City.

“We ran at 4 a.m. in Cebu and we put some high elevation masks on so we can get a feel of the climate in Baguio City but it seems that we underestimated the cold and the climate here,” said Cantal. “But I believe that my athletes will adjust in time for our competition.”

According to Cebu Province’s official physician Dr. Don Ferolin, who is with the delegation, this problem was expected because the city is elevated, sprawled above the mountain peaks of Benguet Province with an average elevation of 5,000 ft. above sea level.

But Ferolin said they prepared for this situation.

“Their muscles demand more supply of oxygen that’s why they easily get cramps and having difficulties in breathing but that is just part of acclimatizing to a new environment where the climate is very different from what they are used to,” Ferolin said. “There is nothing to worry about. We already instructed the coaches to give them enough load of potassium to prevent the athletes from suffering cramps during the competition. Give them bananas, drink hydration and sports drink to replenish potassium. That is not that concerning with regards to our athletes’ safety.”

Ferolin is also confident that the athletes can pull off their optimum performance during game day.

“They are here since Thursday, probably they already acclimatized themselves to Baguio City’s climate, I think they can perform their best during the competition and they are able to adjust,” added Ferolin.

The delegation decided to stay at the Philippine Sports Arena in Pasig City when Typhoon Ompong passed through north Luzon. They arrived in Metro Manila on Thursday and were supposed to travel to Baguio City but the Cebu City Government ordered them to stay put as the typhoon passed.

The Cebu City delegation is composed of 268 members.

There will be 88 local government units competing in this meet, totaling 2,715 athletes.

Baguio, the defending champion, is one of the favorites in this competition anew because of having homecourt advantage.

There will be 29 sporting events in the meet that will last until Saturday.