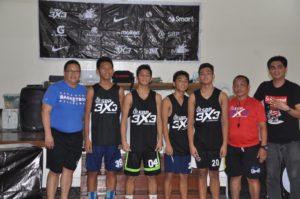 Members of the Sisters of Mary School Boystown with league officials. |
Contributed photo

THE SISTERS of Mary School Boystown put on an amazing long distance display to beat the Sacred Heart School-Ateneo de Cebu, 21-8, and capture the title in the SBP Under 16 3X3 Pambansang Tatluhan Regional Finals on Saturday at the SMS-Boystown in Minglanilla.

Boystown got off to a fantastic start, making their first five two-pointers to take a 10-0 lead. They did not look back after that to claim their very first major title since their basketball program was established in late 2016.

SMS-Boystown will next represent Central Visayas in the national finals in Manila in October.

The two finalists advanced to the championship round without tasting a single defeat. Both teams went 3-0 (win-loss) in group play before dispatching of their respective opponents in the semis.