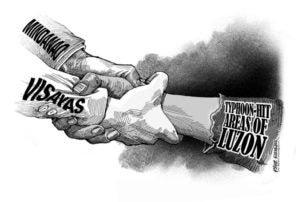 It’s been barely two days since supertyphoon Ompong (international name Mangkhut) devastated northern Luzon but we’d like to think that the Filipino people responded just as strongly to the collective call for assistance to those who lost their loved ones, their homes and everything they hold dear.

Long before the supertyphoon moved to China, the Cebu provincial government decided to send aid to the victims displaced by the calamity. It had also sent aid to the families hard hit by typhoon Sendong in Cagayan de Oro in 2011 and had mobilized aid to provide aid to families hit by supertyphoon Yolanda not only in northern Cebu but in Tacloban City.

There is a reason to hope that other local governments in Metro Cebu will also follow suit. Their cash and material aid may not be much but in these trying times every little bit helps and the spirit of generosity untainted by self-interest can be quite infectious enough to inspire people to also give back.

It’s been nearly five years since we saw trucks filled with basic commodities lumbering through mud soaked roads for hours to reach the towns of northern Cebu that sustained losses in the wake of Yolanda’s wrath.

It is scenes like these that move and remind Filipinos that yes, there are kindred souls that won’t hesitate to help those that have fallen by the wayside regardless of their beliefs, social status and political affiliation — good Samaritans that give without any thought of receiving anything in return.

Those that cannot give cash or anything material can also help in other ways like raising funds and doing backbreaking work in the field as well as helping teams to search for the whereabouts of those that went missing in the dead of night when the rains and winds hit hardest.

Again we cite Cebu’s experience with Yolanda in which student volunteers holed up in the dilapidated Cebu International Convention Center (CICC) took shifts to pack relief goods 24/7. It didn’t take much convincing for them to join the relief effort and they only gave their valuable time to help those in dire need.

We can only hope we see less of elected and appointed public officials deliberately inserting themselves into the picture, distributing relief goods marked with their names to the victims in order to enhance their election and reelection prospects.

Still, it doesn’t deter the fact that while Filipinos still have to learn more and be actively responsible for taking care of their environment they are not so apathetic that they are unwilling to help their neighbors. We continue to believe that the bayanihan spirit remains strong within us.