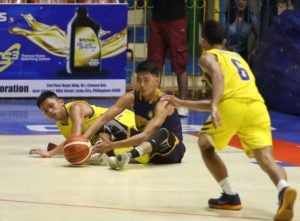 Players of UC and USPF battle for a loose ball in a Cesafi men’s basketball game at the Cebu Coliseum. Lito Tecson

With their offense sputtering for long stretches, the University of Cebu (UC) Webmasters tightened up their defense, locking up the University of Southern Philippines Foundation (USPF) Panthers in the second half to come away with a 55-45 win in the 2018 Cesafi men’s basketball tournament on Tuesday night at the Cebu Coliseum.

The win completed UC’s sweep of the first round, putting them firmly at the top with a clean 6-0 (win-loss) record.

USPF dropped to third place with a 4-2 card.

With the Webmasters shooting just 32 percent from the field, they dug deep on the defensive end of the floor, holding the Panthers scoreless for more than six minutes in the fourth, while Darrell Shane Menina, Justine Dacalos and Frederick Elombe all made buckets to help UC take a 51-38 lead.

USPF pulled to within eight but UC guard Justine Dacalos stole the ball away twice while Paul Galinato scored on a hard drive to the rack to bring the lead back to 10, 55-45, and seal the win for the Webmasters.