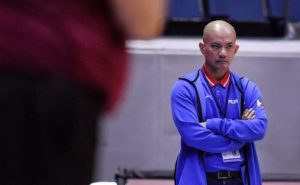 With the game played behind closed doors, the Philippine team looked for other ways to draw crowd support against Qatar in the Fiba World Cup Asian Qualifiers Monday night.
The silence was deafening inside a near-empty Araneta Coliseum, the stage where countless historic sporting events had been held, with only less than 150 people allowed inside.
“It’s kinda surreal or it felt really weird playing in your own country or in your home stadium against another country and there’s no one cheering you,” national team coach Yeng Guiao admitted during the post-game press conference.
“So what we did was we were the ones who cheered for one another and after a while you get used to it,” Guiao added. “I also told them that a lot of Filipinos are watching us on TV, livestream and listening to us on the radio so just visualize that and imagine that and maybe that’s going to help you put out that effort.”
Guiao also said the crowd’s absence had an effect on Gilas Pilipinas’ flat start.
The Filipinos, facing the injury-riddled Qataris, fell behind by as much as 17 points before mounting a spirited rally in the third quarter behind their unrelenting defense to turn a 13-point deficit to a three-point lead en route to a 92-81 win.
Shooting guard Matthew Wright, who returned from a one-game suspension along with Japeth Aguilar, believed that had the fans been present, Gilas would’ve made an even bigger run.
“Just the energy that they create I felt that the run that we had in the third quarter if we had the crowd behind we would’ve pushed it even more,” Wright said. “We did miss them today.”

Read Next
‘The How’s of Us’ makes history; earns more than P600M