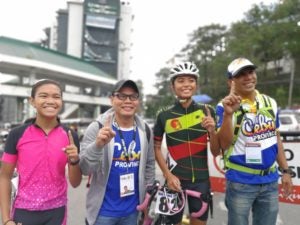 Baguio City — It was a proud moment for the vaunted Talisay Luigi Triathlon Group (TLTG) as its bets won gold medals for Cebu Province in the criterium race of cycling in the Philippine Sports Commission (PSC) Batang Pinoy National Finals 2018 here.

Cebu Province now has five golds in the meet.

Asha Blanchie Pacia of Toledo won one in taekwondo on Monday.

Kym Therese Guilot added a gold in the kyurogi (sparring event) of taekwondo yesterday while the tandem of Jesha Cervantes and Maria Julianna Maravillas topped girls’ lawn tennis for the fifth gold.

The ninth grader Del Rosario, a student of the University of San Carlos-Basic Education (USC-BED), defeated her friend and teammate Moira Frances Erediano to win the gold medal in the 14-15 years old category. Cebu City’s Katherine Yu rounded off the top three.

For TLTG and Cebu Province triathlon and cycling coach Roland Remolino, Del Rosario and Cañete’s success was a big boost for the entire TLTG team.

“Personally, I am very proud of them all,” said Remolino.

Although Del Rosario and Cañete beat their teammates for the gold, Remolino said his triathletes are aware that competition should be set aside after the race. He said regardless who wins, the entire team, which he considers as his family, gets the credit.

“During the race, they compete individually, they became rivals but our team does not miss any achievements of our athletes regardless. Because representing the team matters to us the most that is why no matter how painful it may be to place second or third behind your teammate, they will easily forget and move on because for them their teammate’s win is a win for the entire team,” said Remolino.

Del Rosario, who usually finishes behind Erediano when they compete against each other, was surprised with her victory.

“I really did not put in my mind that I will win the race because usually, they are always ahead of me,” said Del Rosario, a first timer in the Batang Pinoy meet. “I was very surprised and very happy that I finished first.”

Cebu City, meanwhile, had five gold medals yesterday courtesy of its weightlifters, karateka and wrestlers to total seven gold medals as of this writing.