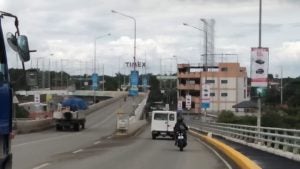 MOTORISTS and airline travelers are advised to plan ahead their schedules so as not to be caught in traffic at the Marcelo Fernan Bridge due to an ongoing repair at the bridge that began last night.

The Department of Public Works and Highways in Central Visayas (DPWH-7) has announced the partial closure of the base portion of the viaduct of the second bridge to pave the way for the concreting of this portion of the bridge that links to the road.

Engr. Eda de Guzman, the chief of the maintenance section of DPWH Cebu 6th District Engineering Office, said they reconsidered their original plan to totally close the area bound for Barangay Mactan because of the horrendous traffic it could create.

“Originally, (our) scheme was to totally close the viaduct then rerouting the vehicles towards the right, and U-turn towards the airport or any area towards Punta Engaño,” she said in a phone interview.

Instead of closing the two lanes of viaduct heading to the airport road, De Guzman said they decided to open the other half of the lane for vehicles to traverse to the island.

“We will open the other lane sa traffic sa daytime. Sa gabii kay (In the evening) total closure lang from 10 p.m. to 5 a.m.,” De Guzman said.
De Guzman said they started cutting the asphalt pavement of the 45-meter lane.

“Among tangtangon ang asphalto among i-repair ang base niya ug ilisan namo og concrete. Diha man gyud ang stress niya from vehicles. Ang impact sa vehicles inig tugdon niya maong dali ra ma-damage,” De Guzman
explained.
(We will scrape off the asphalt, repair the base and replace it with concrete. That portion experienced stress from the impact of vehicles that are descending from the bridge, which is why this section easily gets
damaged.)

Napule said they would also implement a traffic rerouting scheme, as they anticipated a slow traffic movement in the area because of the ongoing rehabilitation.

For motorists bound for Barangay Mactan, Napule said they are advised to make a right turn going to Barangay Pusok, and then do a U-turn in a slot near the city’s abattoir located at Sitio Semento of the same barangay.

He also advised drivers of light vehicles to use the Mactan–Mandaue Bridge for the meantime.

Lawyer Glenn Napuli, acting MCIAA assistant general manager, advised passengers to go to the airport earlier than schedule so as not to get stuck by the traffic on the second bridge.

De Guzman said they are targeting to finish the repair by Sept. 26.

The bridge has been placed under rehabilitation since February, with a total budget of P18 million. Among the improvements that were done included

the strengthening of slab bridge deck and the installation of solar studs on the second bridge.

Read Next
Magpale changes mind, will run again next year