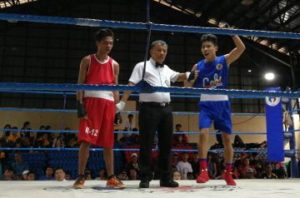 This is what the delegation heads of both Cebu City and Cebu Province said at the end of the Philippine Sports Commission (PSC) Batang Pinoy National Championship yesterday in this city also known as the Summer Capital of the Philippines.

After five grueling days of competition, athletes of both Cebu City and Cebu Province put up impressive performances that satisfied their respective delegation heads.

Among the two, it was Cebu Province that surpassed their performance in the 2016 edition of the Batang Pinoy National Finals held in Tagum City, Davao del Norte. Cebu Province won a total of 23 gold medals, eight silvers and 20 bronze medals to beat its 2016 record of 17-17-17 (gold-silver-bronze). Cebu City finished with a 36-40-40 record, almost the same with its 2016 tally of 36-44-65.

PSC officials have yet to release the final medal tally and the final rankings of the participating local government units but whatever their placing will be, Cebu City Sports Commission (CCSC) Chairman Edward Hayco and Cebu Provincial Sports Commission (CPSC) Executive Director Atty. Ramil P. Abing believe their athletes did well in the multisporting meet.

“Whatever is our ranking, we are very ecstatic that we won as a team, and not individually,” Hayco said of his team, which had to stay put in Manila before the start of the competition due to Typhoon Ompong. “The spirit was strong. That’s what sports is all about. It’s about the challenge and the journey in reaching our goals, whether we make it or not. But I think it is mission accomplished.”

For Hayco, what’s important is the experience the kids got in competing in this level.

“We are after the transformational experience of the kids. It is good if he or she loses. We want them to learn from that,” said Hayco, who arrived in Baguio City yesterday along with CCSC Commissioner Allan Delantar.

Cebu City sent a total of 268 athletes, competing in most of the 27 sporting events.

Cebu City capped off the final day of hostilities with four gold medals. Its boys’ volleyball team clinched the gold medal at the University of the Cordilleras (UC) gym by beating Davao del Norte, 25-16, 25-18, while at the Saint Louis University (SLU) gym, its girls’ basketball team edged Pangasinan, 72-62. Two more golds were added in arnis, courtesy of siblings Henry and Hilary Talledo.

Cebu Province, meanwhile, sent just 170 to this meet, which is the reason why its medal haul this year is quite impressive.

“We are very satisfied (with our performance),” Abing said. “We surpassed our previous performance. We are very happy that we (accomplished this despite) the typhoon and the very cold weather here. We’ve been through difficult times but thank God we made it.”

Despite its better showing this year, Abing believes there’s more room for improvement. This is why this early, he is already thinking of ways to make the team better.

“We will instruct our coaches to train our athletes harder so that we will improve furthermore in the medal tally and also we want to reach our ultimate goal, which is to top the meet,” said Abing.