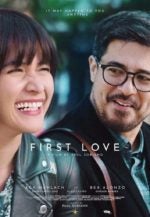 AGA Muhlach and Bea Alonzo’s upcoming film, “First Love” is about a hopeless romantic businessman and a photographer who has a heart condition.

The film’s trailer, uploaded on Ten17 Productions’ Facebook page, starts with Nick (Muhlach), a businessman, who believes that when dies, he will be in space.

The trailer then continues with Nick conversing with the character portrayed by Edward Barber.

“What about the girl you met?” he asks Nick.

Alonzo, who plays Ali, a photographer is then introduced in the trailer.

“First Love” is the first film team-up of Alonzo and Muhlach.

Three months ago, both stars went to Vancouver in Canada to shoot some scenes of the movie.

Also starring Sandy Andolong and Albie Casiño, it will be shown in Philippine cinemas starting October 17.