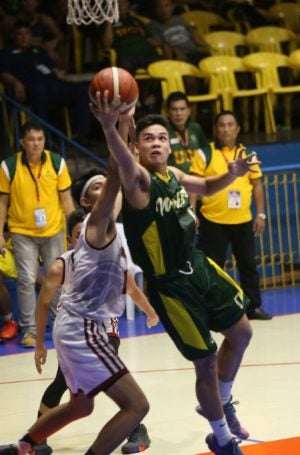 Khadshein Tagalog of the USC Baby Warriors goes for layup against Mathew Earl Flores of the SWU-Phinma Baby Cobras in a Cesafi juniors game at the Cebu Coliseum. /Lito Tecson

The University of the Visayas (UV) Baby Lancers racked up their sixth win in a row with a 118-67 demolition of the Cebu Institute of Technology-University (CIT-U) Wildkittens in the 2018 Cesafi juniors basketball tournament on Sunday at the Cebu Coliseum.

Khadshein Tagalog collected a double-double with 15 points and 12 rebounds.

The Don Bosco Greywolves also barged into the win column with a 46-42 win over the Cebu Eastern College Dragons.

Joshua Siona led the way with 13 markers to break a six-game losing spell.