‘City is proud of you’ 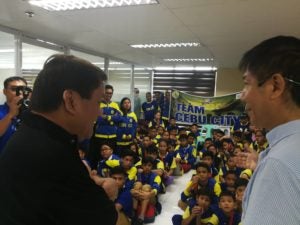 Cebu City Mayor Tomas Osmeña expressed his appreciation to the athletes of Team Cebu City who competed in the Philippine National Games (PNG) in Cebu last May and in the Batang Pinoy National Championships in Baguio City last month.

The mayor was thankful not only for their performances in the two multisporting meets but also for their part in helping kids train for free under the Cebu City Sports Commission’s (CCSC) grassroots program.

Cebu City’s athletes in both the PNG and the Batang Pinoy are all volunteers of the CCSC’s free grassroots training program. Their volunteer work serves as their ticket to be included in Cebu City’s lineup for various meets in the country, including the two organized by the Philippine Sports Commission (PSC).

In the Batang Pinoy Nationals, Cebu City finished second to hosts Baguio. But Osmeña was still delighted with how the athletes performed.

The PNG’s purse for the overall champion was initially set at P5 million but President Rodrigo Duterte doubled the amount during the official opening ceremonies of the meet.

Some is also intended to be used for CCSC’s grassroots program in sports.

“Major part of it will be for the sports equipment, improvement of sports facility, and a portion of it for their (athletes and coaches) cash incentives, but this will still be determined,” said Hayco.

Today, Fernandez will head to the Cebu Provincial Capitol to meet with Cebu Provincial Governor Hilario “Jun-jun” Davide III for the turnover of the P2 million check for placing fifth in the PNG.

Read Next
Another successful on-site registration for Ironman