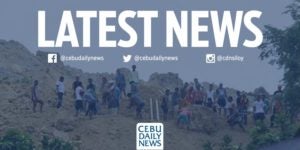 The Cebu Provincial Government will donate over 2 hectares of the 24.7-hectare Balili property to the city government of Naga as a relocation site for the displaced landslide victims.

The donated lot is also the same area where the old Philippine railway used to traverse.

Daan and Bacaltos, who are board members from the first district, will sponsor the resolution for the donation of the lot.

Naga City is among the local government units under the province’s first district.

The resolution to donate the lot, according to Magpale, will be discussed in their session on Monday (October 8).