Part of Balili property to be relocation site 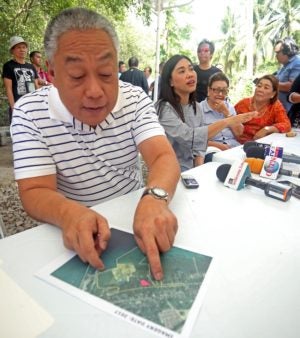 Cebu Gov. Hilario Davide lll shows the portion of the Balili property which will be made the relocation site for the landslide victims and those living in the unsafe zones. CDN PHOTO/LITO TECSON

What used to be the track of the Philippine Railway in Cebu will be where the families displaced by the landslide in Barangay Tinaan, Naga City will rebuild their homes and their lives.

The Cebu Provincial Government, on Tuesday, committed to donate the over two-hectare stretch of the old railway track to the Naga City government as a relocation site for families that will be displaced following the delineation of the Mines and Geo-sciences Bureau (MGB) of the unsafe zones surrounding ground zero of the landslide .

Daan and Bacaltos, who represent the first district where Naga City belongs, will sponsor the resolution for the donation of the lot.

Magpale and the board members present vowed to take up and pass the resolution allowing the provincial government to donate the lot during the PB session on Monday (October 8).

The area is part of the controversial 24.7-hectare Balili property.

Davide said that they will notify the Office of the Ombudsman about their plan to donate the lot.

“Mosugot man gyod na ang Ombudsman kay that is humanitarian. But we will write to them,” said Davide.

Davide also said that the Provincial government will donate P1 million to the Naga City government and P10,000 for each of the casualties of the landslide.

The area within the unsafe zones will be completely abandoned and will be declared a no-build zone in compliance with the order of Environment Secretary Roy Cimatu during his visit to the landslide area last September 21.

During the geotagging conducted by the MGB-7, about 350 structures which may include houses, a waiting shed, pigpens and other temporary or permanent structures were identified.

Naga City Mayor Kristine Vanessa Chiong said personnel from the LGU are currently conducting a ground validation as to how many families will be evicted from the unsafe zone delineation.

Chiong said that they will provide an augmentation of 80 units.

The P25-million budget to be used for the construction of the 80-unit housing project was initially intended as the initial payment of the city government for a nine-hectare area of the Balili property, to be developed into an industrial and economic zone.

The purchase had been the subject of an agreement between Naga City and the Provincial government.

The NHA committed to construct the 320-unit permanent housing within six to eight months after obtaining the clearances, while the 80-unit counterpart of the city government would be done within three months upon completion of the necessary requirements.

Although MGB Central Office has already cleared the Balili Property as a relocation site, the NHA is still waiting for a clearance from the Philippine Institute of Volcanology and Seismology (Phivolcs) and the Philippine Atmospheric Geophysical Astronomical Services Administration (Pagasa) to determine whether or not the place is safe from earthquakes, tsunamis and storm surges, among others, since the property is a coastal and reclaimed area.

Davide however clarified that the parcel of land donated to the Naga City government is not part of the reclaimed area which is now a subject of an administrative case against former governor and now third district representative Gwendolyn Garcia.

Read Next
High incidence of dengue in Toledo, cause for concern