Palace: People will know if Duterte has serious ailment 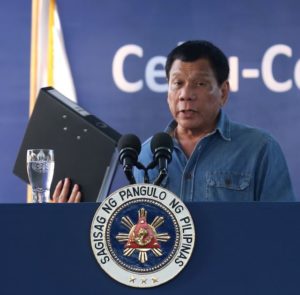 The public will know if President Rodrigo Duterte has a serious ailment.

This was Presidential Spokesperson Harry Roque’s assurance on Thursday as speculations on the President’s health resurfaced after skipping an event in Malacañang after allegedly being brought to a hospital.

Roque insisted that Duterte just took the day off on Wednesday after having an “almost every day” activities in the past week.

“He had a schedule almost every day, he did not really have a day off so the President decided to have a private time,” Roque told reporters in a press briefing.

Answering to queries that the President was brought to a hospital, Roque insisted that it is not true.

“Absolutely no truth to it, he just took the day off,” he said, noting that the President keeps on visiting military camps even on weekends to add on his already hectic schedule.

Duterte’s official mouthpiece went on to plead for the public’s trust as the President will submit to his official functions, which include the release of a medical bulletin in case of a serious ailment.

“Ang punto lang is please trust that he… if has a serious ailment, the people will know. I know I keep on repeating this but he’s a lawyer, he knows his constitutional obligation, if there’s a ground to release it (medical bulletin) he will but for the time being let’s keep medical records confidential,” he said.

Duterte skipped his scheduled event with the officials of the Philippine Amusement and Gaming Corp. (Pagcor) in Malacañang on Wednesday.

Duterte’s trusted aide, Secretary Christopher “Bong” Go, told reporters that the rumor is “100 percent” not true and the President just felt tired in his visit in Catarman, Nothern Samar, the other day.